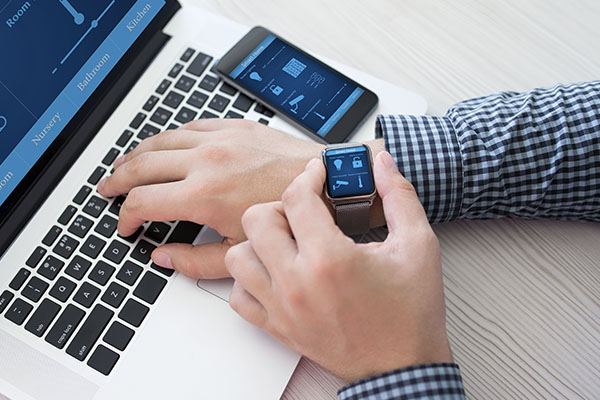 One of major advantages of the Internet of Things (IoT) is its massive data-gathering capability. IoT data, when complemented with relevant contextual information, can support business decisions with accurate, dependable, relevant, and timely information for enabling predictive, prescriptive, and other forms of analytics. Improving IoT systems through context-awareness is one of the next greatest challenges in the field.

The term “IoT-enabled awareness” refers to the ability of the system, application, or service to be globally aware, including context-aware, situation-aware, event-aware, human-aware, location-aware, and process-aware. IoT data underpins the ability to develop IoT ecosystem-wide awareness of everything that is happening, happened, or might happen within the system realm, whether that is processes, events, activities, locations, or preferences. IoT-enabled awareness is different from self-aware computing. Self-aware computing systems focus on making the system knowledgeable about itself — its internal operations, states, and processes. IoT-enabled awareness goes beyond self-aware systems by also incorporating global-level awareness about the system and its environment.

The articles and video in this November 2017 Computing Now theme address challenges in IoT-enabled awareness and propose solutions.

Figure 1 illustrates an IoT-enabled awareness framework in which IoT applications and services are aware of their components, environment, and users. Data is acquired from the IoT devices (in a step called “sensing and observing”), that data is validated and interpreted, and then context is inferred to generate situation-awareness. The inferred context is then used to proactively adapt the IoT ecosystem to support decision making and/or actuation. 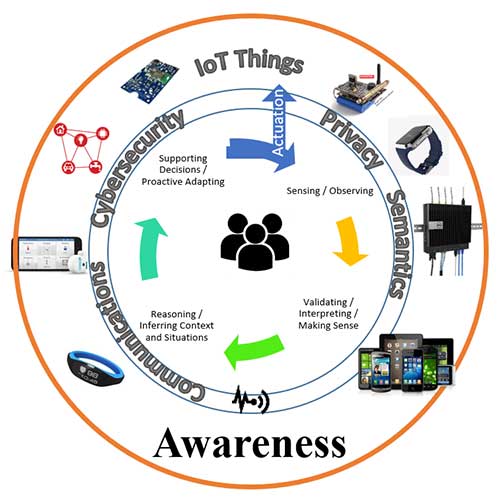 In “Contextualised Service Delivery in the Internet of Things: Parking Recommender for Smart Cities,” Ali Yavari, Prem Prakash Jayaraman, and Dimitrios Georgakopoulos focus on services for solving problems involving IoT-enabled observation, orientation, decision, and action (OODA) loops. The authors define contextualization as the “process of identifying the data relevant to an entity based on the entity’s contextual information.” They propose a technique for IoT-based contextualization that operates on Internet-scale data (effectively considering the entire dataset collected in smart cities) and uses the data to provide effective and efficient hyper-personalized information based on each user’s context. In essence, they propose a means to transform context obtained from IoT data to develop IoT-enabled awareness services. They provide a smart parking scenario that considers multiple contextual categories, including the driver’s context (such as driver preference and driving experience), the car’s context (such as the car’s dimensions), the parking location context (covered or open and time limit), and the location of the car.

Amit Sheth provides an account of IoT-enabled awareness along the data, information, knowledge, and wisdom (DIKW) path in “Internet of Things to Smart IoT Through Semantic, Cognitive, and Perceptual Computing.” He identifies semantic, cognitive, and perceptual computing as the pillars for transforming cyber-physical and social data into smart data, giving deeper insights and making data actionable. Semantics underpins the ability to deal and interpret data in context, despite differences in syntax, representation, or structure. The cognitive ability provides a way for the systems to learn, loosely mimicking the process of cognition in the human mind. Finally, perceptual computing systems’ contextual and personalized exploration of the physical world addresses IoT’s awareness challenge. The author presents these areas as foundations for the next evolution of IoT: using IoT data to build a cyber-physical, ecosystem-wide awareness.

In “Semantic Model for IoT-Enabled Electric Vehicle Services: Puzzling with Ontologies,” Min-Jung Yoo and colleagues present their ideas and discuss how semantic modelling and ontologies are used to collect and reuse product-service lifecycle data in an IoT-enabled framework. The article discusses the role of product-service ontology as the backbone of vehicle lifecycle management. The authors argue that ontologies and semantic interoperability enable technologies for creating services such as charging location finding and traffic information services. The article illustrates the proposed concepts using an electric vehicle as a case study. Among interesting challenges discussed in the article are multisensory data fusion, semantic reasoning, dealing with uncertainty, and W3C’s Semantic Sensor Ontology (SSNO).

“Managing Context Information for Adaptive Security in IoT Environments” describes how IoT-enabled awareness can be used to realize context-aware security in IoT scenarios and applications. Jose L. Hernandez-Ramos, Jorge Bernal Bernabe, and Antonio F. Skarmeta propose techniques that can adapt the security decisions in the IoT based on the context in which transactions are performed. They demonstrate how their proposed IoT security framework can use awareness obtained from IoT data to empower smart things when making security decisions.

In “Rethinking Context: Leveraging Human and Machine Computation in Disaster Response,” Sarah Vieweg and Adam Hodges investigate how human pragmatic awareness can be used to create human-computer systems capable of both extracting large quantities of data and processing that data in a way that is meaningful to users. They touch on an important aspect of IoT awareness: the human in the system, or the social aspect of the system. They present a disaster response system that considers human context available from social media platforms such as Twitter. They conclude that a more effective human-computer symbiosis will be an important feature of future cyber-physical systems.

This month’s video features a prominent industry expert working in IoT, machine learning, and context-awareness. Shonali Krishnaswamy is CTO of a Singapore-based start-up called AIDA Technologies. In this video, she comments on the importance and challenges of IoT-enabled awareness in modern systems, services, and applications.

We are witnessing a new stage in IoT evolution: IoT ecosystems with context-awareness. The articles and video in this theme issue address various important challenges that IoT-enabled awareness raises and propose solutions that will make the IoT more practicable, feasible, secure, perceptual, cognitive, deployable, and usable. Of course, more research is needed and many more challenges should be resolved before IoT-enabled awareness becomes a core feature of IoT-based applications, systems, and services in the next five to seven years. Interested readers are encouraged to do further research and reading and to join the big community of IoT champions, researchers, developers, architects, and users.

Arkady Zaslavsky is senior principal research scientist at Data61 of the Commonwealth Scientific and Industrial Research Organisation (CSIRO), Australia. He is also an adjunct professor at the University of New South Wales, La Trobe University, and ITMO University. Zaslavsky has a PhD in computer science from the Institute of Control Sciences, USSR Academy of Sciences. His technical interests include the IoT; pervasive, ubiquitous, and mobile computing; context-awareness; semantic data management; and mobile analytics. He is a member of the Computing Now editorial board. Contact him at arkady.zaslavsky@csiro.au.

Prem Prakash Jayaraman is a research fellow at the Swinburne University of Technology. His research interests include the IoT, cloud computing, big-data analytics, and mobile computing. Jayaraman has a PhD in computer science from Monash University. Contact him at pjayaraman@swin.edu.au or www.premjayaraman.com.