Nvidia’s Quadratic Processor, the NV1
By Dr. Jon Peddie
Visit our Jobs Board

An advanced design the industry wasn’t ready for

Founded in early 1993, Nvidia set out to revolutionize the PC and console gaming market with 3D. They succeeded beyond even their wildest dreams, but not without a few bumps and bruises. It just made them smarter and stronger. 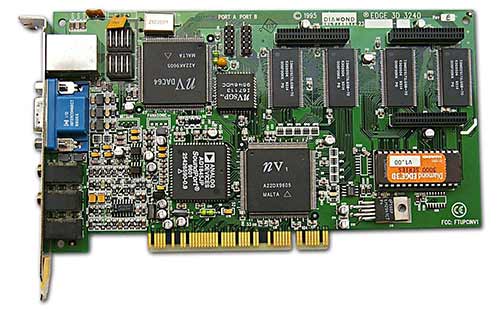 Nvidia announced itself in the summer of 1994. It planned to develop single-chip media accelerators for high-quality interactive multimedia on PCs.[1]

“We intend to focus our engineering resources on the rapid development and introduction of new families of industry-defining Media Accelerators,” said Jen-Hsun Huang, president, and co-founder. According to a company spokesperson, Nvidia’s first-generation Media Accelerator will enable PC platforms to deliver high-performance 2-D and 3D graphics, video, a digital joystick interface, and advanced audio capability to accelerate the rapidly growing installed base of multimedia applications.

The opening premise was to build a 3D graphics controller based on quadratic texture mapping. Quadratic rendering was a dramatically different approach to the popular polygon rendering of the day.

The company also sought to differentiate itself by incorporating sound in the chip. If successful, that would mean a gamer only had to buy one add-in board (AIB).

Nvidia followed the fabless model. However, it wasn’t easy for a start-up to get a fab’s attention and, most of all, commitment. Setting up a product line was (still is) a risky and tricky business. Nvidia got lucky and convinced SGS-Thomson Microelectronics (SGS) to build the chip, and in exchange, SGS could also market it. [2]

Nvidia marketed the NV1 VRAM version, while SGS offered the STG2000, a DRAM version. Introduced in May 1995, the STG2000 was a PCI-based multimedia PCI AIB. Nvidia also got a design-win with Diamond, the largest AIB supplier of the time. Diamond then introduced the Diamond Edge 3D into retail channel. 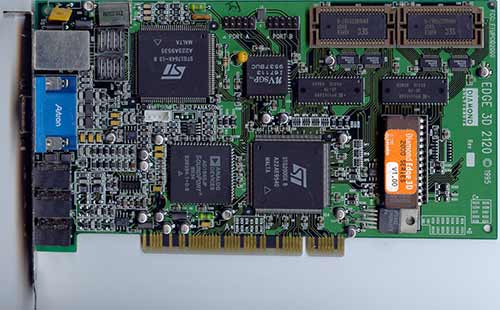 But Nvidia, Diamond, and SGS couldn’t get game developers to invest in the NV1 quadratic texture mapping and Nvidia’s SDK for it.

The first company to show interest in Nvidia’s chip was Sega, as a way to bring the games available on the Sega Saturn to PC platform. Saga’s interest prompted Nvidia at include a joypad port in the chip.

The key features of the chip included:

The purely graphics (2D & 3D) portions of the chip had about 200 of the approximately 250 thousand transistors that made up NV1. 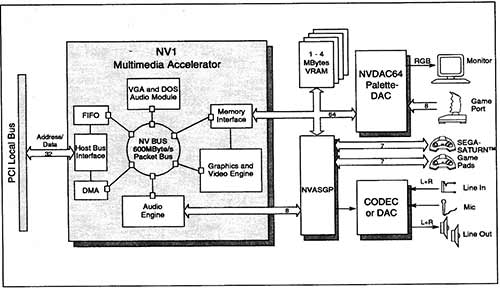 The chip was the earliest example of accelerated computing, making the peripherals the accelerators. A virtualized programming interface allowed hardware to change while software continued to work – i.e., programming architecture. Nvidia’s strategy today goes all the way back to the very beginning.

Co-founder Curtis Priem and Chief Scientist David Rosenthal were the chief architects of the chip and its programming model, and co-founder of Nvidia Chris Malachowsky was the chief engineer. Their goal went beyond NV1, it was to create a virtualized architecture for all things IO (including graphics) and audio, etc., that Nvidia could build on well into the future.

As a result, Nvidia’s SDK was very object-oriented in that a developer would open a class type (graphics, streaming, audio, etc.) and then write directly to the class type’s registers in the targeted chip. If the chip supported the class and those registers, the operation would be executed in the chip’s hardware. If not, a privilege software kernel would be called by the chip (unbeknownst to the developer) that would execute the operation on the host, often with support from the chip’s hardware. As far as the developer was aware, the targeted chip supported everything exposed in the SDK.

Before Microsoft introduced DirectX, Nvidia envisioned game developers would write to the SDK for their application’s acceleration(s).

Much of that architecture is at the heart of Nvidia’s design today and how the company has been able to use so much code between chip generations. Today, the primary user of the evolution of Nvidia’s architecture is their drivers and the new platforms created with it – CUDA, Deepsteam, etc.

Nvidia said their goal was a multimedia architecture that would address the well-known problem with multimedia PCs of the time. The PC of that era was not so much a platform as a collection of single-function add-ons that made life difficult for both developers and consumers. Nvidia claimed its architecture provided a “coherent multimedia platform” with concurrent media streaming, interactive 3D graphics, high-fidelity audio synthesis, full-motion video texturing, and a digital joystick.

The big win, PR-wise at least, for Nvidia was Sega. Sega of America established an exclusive licensing agreement with Nvidia and said it would convert Sega’s Saturn and arcade software to CD-ROMs for PCs equipped with Nvidia’s multimedia accelerators. Nvidia set up an exclusive license for PC 3D accelerator AIBs, meaning that Saturn-based games could not be ported to any other hardware 3D PC AIB. That software pushed Sega Saturn’s sales to more than one million units in Japan since its introduction in November 1994. Launched in the U.S. in May 1995, Sega Saturn quickly sold out of its limited U.S. debut distribution. The company said it would be in full distribution by early September. Saturn games were to be released for the Nvidia-based products 3-6 months after first appearing for the Saturn platform.

Tom Kalinske, president and CEO, Sega of America, said at the time he believed the markets for gaming on home PCs and dedicated video game machines such as Sega Saturn would thrive in the future. The PC games market could reach approximately 20 to 25% of the video game market by 1999. Sega said it would spend $30 to $50 million on advertising for the Saturn over the next year.

According to Nvidia, the Sega software would take advantage of every facet of their NV1 technology and drive the chip to its limit. Jen-Hsun Huang, Nvidia’s CEO, said he thought, “PC consumers are going to be stunned with the results of our combined efforts.”

Intel also got into the act and planned a presentation at SIGGRAPH with Nvidia. Intel said it would also make Sonic the Hedgehog available to OEMs (Intel ported it using its native signal processing software—NSP. That later resulted in a fight with Microsoft that got to the U.S. Department of Justice—but that’s a story for another time).

The Sega deal was a significant coup for Nvidia. The company’s quad patch approach had some observers wondering if it was too radical a departure from conventional tri-meshes to get any developers interested.

Nvidia was too far ahead of the curve, as it turned out, and the industry chose to stay with polygonal graphics. There were criticisms with Nvidia’s approach that 2D graphics performance couldn’t compete with other options at that time, especially in DOS. And its audio quality was not as good as hoped for. Being an expensive AIB, it failed to win the market.

Trying to keep Sega happy, Nvidia developed the NV2 with Sega for the forthcoming Dreamcast console. But Sega was very perfidious at the time and dropped Nvidia. The loss of the forward business and the investment Nvidia made in designing the NV2, which never came to market, almost killed the company. In one of the industry’s most dramatic and daring turnarounds, Nvidia dropped its spherical approach, repositioned the company to a polygon design, and two years later introduced the Riva 128—one of the most successful graphics chips ever.[3]

Who was the first?

LSI graphics accelerator chips appeared in the early 1980s as 2D drawing engines with CAD the primary application. In 1981 SGI introduced the first 3D transform engine, the Geometry engine.[4] The first company to offer a 3D AIB was Matrox in 1987 with the SM 640 that used the SGI Geometry Engine. [5]

The first 3D graphics chip was the Yamaha YGY611. However, it was not fully integrated, lacking VGA, and perspective capability. The first fully integrated 2D/3D chip, with VGA, translation, plus video and audio capabilities, was the Nvidia NV1.