Looking Back and Forward
By Dr. Jon Peddie
Visit our Jobs Board

2019 in review and guess at what’s coming

It’s that time of year when we pause, take a breath and say, whoa, the year’s over? What happened? Where are we headed? As the above image portrays, it’s a lot clearer looking back than forward. 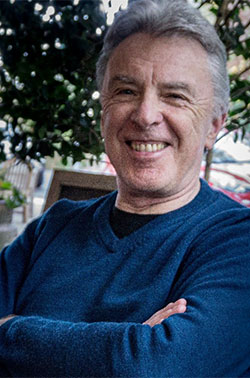 2019 was the year ray tracing entered the mainstream. Nvidia kicked things off in late 2018, but it was 2019 when the new ray-traced games started to arrive. Not only new games, but older games were also jazzed up with retro-lighting and shading software from unaffiliated independent developers that ran on any GPU. Several companies introduced ray tracing benchmarks in games, game engine, professional graphics, and general purpose benchmarking programs, and two great books on ray tracing came out (Ray Tracing: A Tool for All, and Ray Tracing Gems). However, the jury is still out about whether ray tracing is compelling enough for gamers to pay extra money for it. If it comes for free as it seems it will, then it will be like the transition from monochrome to color.

It was the year of frustration for Intel as it struggled to get its 10nm process yields to a point that satisfied both the company and its customers. That hiccup opened the door for AMD who just happened to have a powerful new line up of 7nm processors. It also created a pent-up demand that saw a jump in sales of PCs in Q3 prompting us and the rest of the industry to cautiously predict the PC market’s decline had finally hit bottom and was turning around.

Ultra-wide monitors from Dell, HP, Lenovo, and others went into full production and although the initial price is more than two monitors of the same size and resolution, the borderless, slightly curved displays are a dream to use for business or gaming. Stacking one top of the other is the ultimate in multi-monitor configurations and proves the more you can see the more you can do.

2020 will be exciting and full of challenge. The trade war continues to disrupt and distort forecasts, production plans and supply chains, and burn a lot of precious time and profits trying to deal with it.

Monitors are going to get bigger in size and resolution. The growth we’ve already seen in ray tracing will start showing up more in content as new tools make it accessible to more users. Always on will truly arrive: CPUs will run all day on a battery that can fit in a thin and light notebook that will be almost indistinguishable from a tablet, and communications speeds for WiFi, PCIe, and 5G will make things appear to happen instantly. Intel will join the ranks of discrete GPU suppliers, and Google and Amazon will expand their AI processor capabilities.

The processors will become invisible and everything will be a display — and become more interactive the closer one gets to them.

Camera sensors will continue to drop in price as they are put everywhere. Resolution and speed will go up while size comes down and your car will wear about a dozen or more of them. That will help your car find its way around without your assistance and you will go from being a liability and safety hazard to a passenger, sit up, buckle up, shut up. The decline in car owner ship for people in urban areas will pick up speed in 2020.

Apple, and probably Amazon, will introduce AR glasses, while Qualcomm and Google will offer reference designs.

Everything and anything at the end of the network, the so-called edge, will not only get smarter, but it will be augmented by the cloud and managed.

More stuff will move to the cloud including gaming, security, entertainment, shopping, and medical assistance. In the cloud vast AI systems will anticipate our needs based on massive monitoring of our behavior patterns and millions like us.

High-end, AAA, gaming trends in 2020 will have more full-screen blended motion capture (mocap) and computer graphics. A good example is Call of Duty and Battlefield V. Full 10-bit high dynamic range (HDR) color will be standard of high-end games as will ray tracing. 120 to 240 Hz 4k will also show up on many high-end games. Maps will get bigger, and games will be more open world, allowing the gamer to explore and pursue side quests. Sound realism will be greater, and there will be more audio controls allowing the player to create the sound stage he or she wants. Single player or campaign modes will have fantastic enemy AI where the enemies will actually learn about you and anticipate your moves. Enemies will also become more realistic in their movement due to improved game engine mechanics and mocap. And the stories will become amazing, not limited to simply run and shoot but complex stories that you will need to pay attention to get through the game making the games emotional immersive.

Desktop displays will get larger with higher resolution, and we will spend over 90% of waking hours looking at some type of a screen on a smartphone, TV, PC, movie, driving, or shopping. Not only will we be able to do more by seeing more, but we’re going to be seeing more than we have before.