Is the VR Party (finally) Over?
By Dr. Jon Peddie

Is the VR Party (finally) Over?
The tide has turned in the prediction world

Anyone who follows the mainstream technical press will have noticed the recent wave of stories and editorials about the decline in interest and sales of VR hardware. This is not surprising to me, and in a “told-ya-so” way it has been my forecast for a couple of years.

I believe interactive-VR (IVR) will return to its original place as one of (not the or the only) tools of designers and engineers, as well as medicine, science and engineering. There may be a small cadre of consumers, gamers, who use IVR. Their utilization will vary from 10 minutes to at most an hour, and the population of those consumers will rise or fall as a function of the available content.

Passive VR (PVR), using low cost HMDs, will expand as a vehicle for pre-vacation and future home exploration, some educational applications, specialized treatment and therapy for elderly and emotionally or intellectually challenged people, and as a sales tool such as in automobile dealerships. Some consumers will employ them for entertainment if compelling content can be developed.

I think we have crested the peak of the hype curve, reality (no pun) has set in and all the conferences, web sites, and enthusiasm for VR (I and P) will decline and reach a steady state with slow growth thereafter. Investments will decline rapidly, the exception being in content creation.

The physical issues of weight, resolution, latency, and factors of cost and content will remain and be an asymptote to the novel experience VR brings or promises.

The hope by organizations who have made big investments (bets) that IVR would become a major market segment still exist, as they struggle to find niches and enthusiasts. Using IVR in a chat room will not change the physical and economic issues or change the what I think is the obvious trajectory of the segment.

It took the S3D bubble about five to six years to pop, peaking most likely at CES 2014. The post mortems for that have been examined and I won’t bother repeating them here other than to say the disappointment in S3D and VR share three common faults which were easily identified at the beginning: lack of standards, physical discomfort, and poor content.

Just as we can mark the peak and then decline of S3D at CES 2014, I think we can use that conference as the marker for the peak of interest in VR and I would put it at 2017.

The sad thing that the misplaced hype and hope have brought to VR is the false notion of it being the next great consumer product that would transform entertainment. That kind of overreaching enthusiasm backfires and turns into revulsion as consumers feel not only disappointment but that they have been duped, and there is no wrath greater than a deceived lover.

The good news is the wave of enthusiasm and investment has introduced new technologies, and reduced costs. That has had the effect of extending and even increasing the utilization of IVR in industry and engineering, so in one sense it has been a virtuous circle. Probably the best vehicle for tracking VR is the venerable IEEE VR, now in its 25th year. That is where the real development has taken place and will continue to — you won’t find any games, chat rooms, or silly applications there.

So, the VR party may be over, but VR is not. It’s as if it had won the lotto and squandered the winnings — time to go home and get back to work. 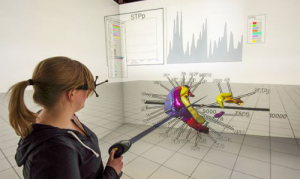 Dr. Jon Peddie is one of the pioneers of the graphics industry and formed Jon Peddie Research (JPR) to provide customer intimate consulting and market forecasting services where he explores the developments in computer graphics technology to advance economic inclusion and improve resource efficiency.

Recently named one of the most influential analysts, Peddie regularly advises investors in the technology sector. He is an advisor to the U.N., several companies in the computer graphics industry, an advisor to the Siggraph Executive Committee, and in 2018 he was accepted as an ACM Distinguished Speaker. Peddie is a senior and lifetime member of IEEE, and a former chair of the IEEE Super Computer Committee, and the former president of The Siggraph Pioneers. In 2015 he was given the Life Time Achievement award from the CAAD society.

Peddie lectures at numerous conferences and universities world-wide on topics pertaining to graphics technology and the emerging trends in digital media technology, as well as appearing on CNN, TechTV, and Future Talk TV, and is frequently quoted in trade and business publications.

Dr. Peddie has published hundreds of papers, has authored and contributed to no less than thirteen books in his career, his most recent, Augmented Reality, where we all will live, and is a contributor to TechWatch, for which he writes a series of weekly articles on AR, VR, AI, GPUs, and computer gaming. He is a regular contributor to IEEE, Computer Graphics World, and several other leading publications.