This is the latest installment of a series of short articles about graphics chips, controllers and processors, that changed the course of the computer graphics (CG) industry.

3Dfx was founded in 1994 in San Jose, California by former employees of Silicon Graphics (SGI) with backing from Gordie Campbell’s TechFarm. In 1995 the company raised $5.5 million dollars from venture capitalists.

3Dfx released its Voodoo Graphics chipset in November 1996. Voodoo was a 3D-only add-in board (AIB) that required an external VGA chip. VGA (for PC bootup) was supplied to the Voodoo AIB with a pass-through cable which then fed the VGA data to the display.

The company was quiet for the two years prior to its release of the Voodoo, and dozens of speculative stories sprung up around it adding to the mystery, myth, and anticipation. Although the company ended up being a PC graphcis AIB supplier, it started out as a board supplier for arcade machines, with New York city-based Innovative Concepts in Entertainment (ICE) being one of (if not the) first to use 3Dfx’s parts.

In late 1995 Fujitsu announced it would use 3Dfx in a new series of gaming PCs it was planning to bring out. During that same period several AIB suppliers like Orchid and Diamond also announced plans to use 3Dfx’s chipset.

Prior to the announcement of the Voodoo chipset, the founders Ross Smith, Gary Tarolli and Scott Sellers were showing their plans for their SST-1 graphics engine for 3D acceleration to various arcade and AIB companies. The founders of 3Dfx had been at SGI during the period SGI developed the first 3D gaming chip for a console, known as the Nintendo 64, which was released in 1996. However, SGI was going trough turmoil and didn’t want to pursue the gaming industry. In addition to 3Dfx, SGI’s decision also caused other chip designers to leave and start ArtX (which was later acquired by ATI).

In its entry level configuration, a SST-1 graphics solution consisted of two rendering ASICS: TREX and FBI. FBI (Frame Buffer Interface) which served as a PCI slave device, and all communication from the host CPU to the SST-1 graphics subsystem was performed through the FBI. FBI implemented basic 3D primitives including Gouraud shading, alpha blending, depth-buffering, and dithering.

Both FBI and TREX supported various memory types including standard, Extended-Data-Out (EDO), and Synchronous DRAM to provide a wide range of price/performance options.

One of the innovative features of the design was its ability to gang TREX units. That became known as SLI — Scan-Line Interleave. SLI also made it possible to increase the maximum screen resolution from 800 × 600 to 1024 × 768. 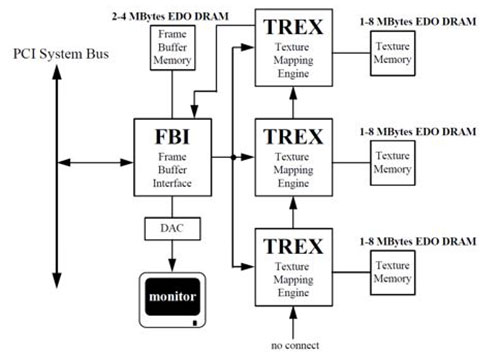 The diagram below illustrates the abstract rendering engine of the SST-1 graphics subsystem. The rendering engine was structured as a pipeline through which each pixel drawn to the screen must pass. The individual stages of the pixel pipeline modified pixels or made decisions about them. 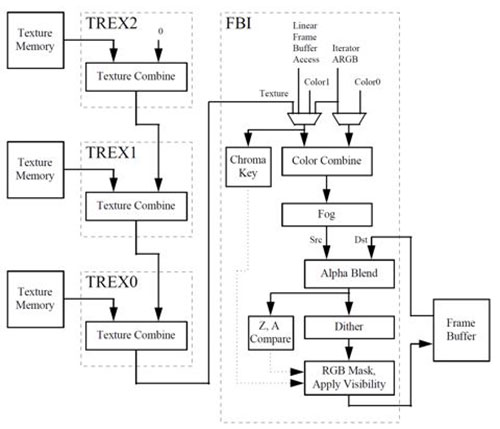 The SST-1 used an asynchronous FIFO, 64 entries deep, which allowed sufficient write posting capabilities for high performance. The FIFO was asynchronous to the graphics engine, thus allowing the memory interface to operate at maximum frequency regardless of the frequency of the PCI bus. Zero-wait-state writes were supported for maximum bus bandwidth. The FIFO: SST-1 memory could also use off-screen frame buffer memory to increase the effective depth of the PCI Bus FIFO.

The SST-1 Graphics Engine from 3Dfx Interactive was the first video subsystem that enabled PCs and low-cost video game platforms to host true 3D entertainment applications. Optimized for real-time texture-mapped 3D games and educational titles, SST-1 provided acceleration for advanced 3D features including true-perspective texture mapping with trilinear mipmapping and lighting, detail and projected texture mapping, texture antialiasing, and high precision sub-pixel correction. However, The SST-1 was not for everybody. Some people found bilinear filtering made the images blurry; others were annoyed by the loss of gamma correction.

The first PC implementation of the chipset was on the Voodoo 1 AIBs, and it was offered by several board manufacturers. 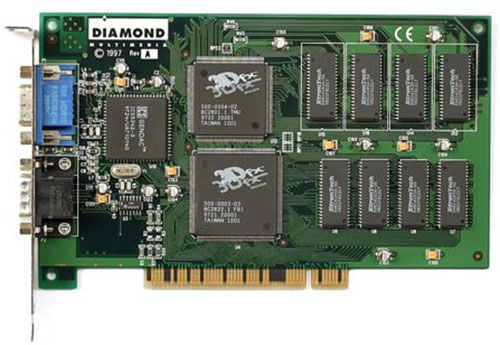 The Voodoo AIBs sold for $300 from most suppliers, and the original version used electromechanical relays that could be heard clicking when the chipset was used in lieu of the VGA. They were later replaced with electronic switches.

The Voodoo was as close as you can come to an instant success. 3D gaming was just getting started and the patched 2D AIBs on the market left a lot to be desired. Also, the Voodoo had state of the art shading and graphics features, the type previously only found in a workstation, showing the founder’s backgrounds.

But not everything went well for the company. 3Dfx had been developing a chipset based on its Voodoo Graphics technology for Sega’s new game console since March 1997. Sega had invested nearly $2 million for the chipset’s development. However, In July 1997 Sega abruptly dropped the project and 3Dfx acknowledged that its chipset was not going to be used, it had been passed over for NEC’s device (based on Imagination Technologies IP). 3Dfx filed a $155 million lawsuit against Sega Enterprises Ltd., Sega of America, and NEC Corporation. claiming it was misled by Sega into believing they were committed to using 3Dfx’s hardware, and in turn 3Dfx gave them access to confidential materials relating to its graphics IP. They settled out of court for $10.5 million a year later. 3Dfx claimed it had lost $55 million in revenues because of the lost contract.

Also during the summer of 1997, 3Dfx’s announced its initial public offering, raised $33 million and launched the Voodoo Rush an attempt at a single AIB with 2D and 3D capability. However, the AIB was unable to use the proposed Rampage chip which then ended up as a cut down version of the Voodoo. The card’s SST-1 chip handled games based on 3Dfx’s Glide API, while a companion Alliance or Macronix chip was used to handle other 3D games and 2D applications. This resulted in unwanted artifacts on the display because the 3Dfx chip/memory ran at 50MHz, while the Alliance AT25 chip ran at 72MHz.

Things got worse as the Voodoo Rush’s framebuffer was essentially cut in half by being shared between the 3D and 2D chips, which also resulting in limiting the display resolution to around 512 × 384. Refresh rates were also reduced because the Alliance and Macronix chips were limited to 175 and 160MHz RAMDAC respectively.

In March 1996 the company announced System3D a customizable, low-cost, scalable system designed to power the next generation of texture-mapped 3D arcade games. System3D was based on 3Dfx’s new Obsidian 3D graphics board for coin-op/location-based entertainment (LBE) games.

STB Systems was a leading AIB supplier in the late 1990s and began using the Voodoo chipset for its boards. STB also had a world-class board fabrication plant in Mexico. In Mid 1998 3Dfx introduced its Voodoo Banshee claiming it was the equal of Voodoo2 except for multi-textures, but with superior 2D performance. Therefore, dynamic environment effects, bump mapping, or other techniques which require multi-texturing accomplished in a single pass on the Voodoo2 required a dual pass approach on the Voodoo Banshee. The AIB sold for $380.

3Dfx continued to only offer its Glide API, while the rest of the industry was moving to Microsoft’s DirectX API. That put developers in the position of having to support multiple APIs which increased their costs. Therefore, it became more difficult for 3Dfx to get leading games that would run on its AIBs.

Despite all that, in November 1998, Creative Labs and its subsidiary, CTI Ltd., which had been using 3Dfx’s chips, bought 6.5% of 3Dfx Interactive giving the company a cash war-chest. Then in December 1998 3Dfx surprised the industry and announced it was going to acquire Richardson, Texas-based AIB builder STB Systems.

But 3Dfx was slipping. It started with the Voodoo2. 3dfx innovated with the original Voodoo, and then proceeded to simply make a faster version of the same thing, over and over, meanwhile its competitors were investing in R&D and moving forward.

Trying to catch up. in early 2000, 3Dfx bought GigaPixel, a small IP company started in 1997, also by SGI engineers. GigaPixel almost won the contract to supply chips to Microsoft for the original Xbox (Nvidia eventually won the graphics controller design). Regardless of the loss of the Microsoft deal, 3Dfx went ahead and bought company with 15.6 million common shares which at the time was worth about $186 million.

In August 2000, Nvidia sued 3Dfx claiming 3Dfx was infringing on five of Nvidia’s patents and requested an injunction barring 3Dfx from selling and distributing its Voodoo3, Voodoo4, and Voodoo5 products. 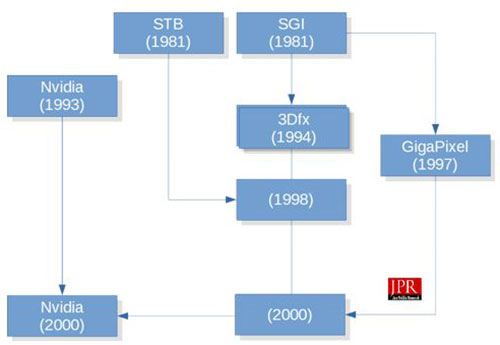 Figure 5: The history of 3Dfx

Things didn’t go well for 3Dfx. They had trouble getting new chips out. The company was out of cash and couldn’t adequately defend itself against Nvidia’s suit. The PC industry started to implode due to the Internet bubble popping, and by the end of 2000 3Dfx sold the assets of its company to Nvidia for $120 million. 3Dfx shut down all operations, laid off all its employees and used the money from the sale to pay off creditors (several of whom were Nvidia’s key suppliers.) The actual deal was Nvidia paid 3Dfx $70 million in cash and one million shares of its common stock and agreed to loan 3Dfx $15 million for its creditors.

The company rose like a firecracker and burnt out like one too in less than five years, yet its name and technology still live on.