This is the first in a series of short articles about graphics chips, controllers and processors, that changed the course of the computer graphics (CG) industry. In buzzword talk, they were disruptive devices, and in addition to changing how things were done, the application of those chips made a lot of companies successful. Ironically, all of them gone now.

In 1982, NEC changed the landscape of the emerging computer graphics market just as the PC was being introduced, which would be the major change to the heretofore specialized and expensive computer graphics industry. NEC Information Systems, the US arm of the Nippon Electric Company (now NEC), introduced the µPD7220 Graphics Display Controller (GDC). The project was started the in 1979 and published a paper on it in 1981 at the IEEE International Solid State Circuit Conference in February 1981.

Prior to the PC graphics display systems came in two classes, high-end CAD systems hung on big IBM and DEC mainframes, and low-end microcomputer systems based on the fledgling Intel 4004 CPU, which were the precursor of the PC.

VLSI technology was just getting rolling and devices with astounding numbers of transistors, 30,000 to 40,000, were being built with the precursor of CMOS, NMOS. CMOS was expensive and had larger feature sizes. An NMOS chip could have gates as small as 5-micron. But they paid for that with power dissipation challenges. The µPD7220, running on 5 v, drew 1.5 W and used a 40-pin ceramic package. 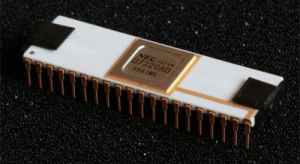 The chip incorporated all the CRT control functions (known as the CRTC) as well as graphics primitives for arcs, lines, circles and special characters. Processor software overhead was minimized by the GDC’s sophisticated instruction set, graphics figure drawing, and DMA transfer capabilities. It supported a light pen and could drive up to four megabits of bit-mapped graphics memory, which was quite a lot for the time.

Prior to the µPD7220 every graphics device had its own drawing primitives library, with IBM’s 2250 (1974), and Tektronix’s 4010 (1972) being the most popular. The µPD7220 established an easy to use, low-level set of instructions application developers could easily embed in their programs and thereby speed uip drawing time.

The chip quickly became popular and was the basis for several “dumb” terminals and a few graphics terminals (a “dumb” terminal being one that couldn’t be programmed and just displayed images and/or text). The controller could support 1024 × 1024 resolutions with four-planes of color, so some systems employed multiple 7220s to get more color depth. In June 1983, Intel brought out the 82720 a clone of the µPD7220.

The µPD7220 was produced until 1987 when it was replaced by a newer faster version, the µPD72120. Seeing its success, and the emerging market for computer graphics, Hitachi and TI also introduced graphics processors a few years later.

You can find out more about this chip and its successors here.

Dr. Jon Peddie is one of the pioneers of the graphics industry and formed Jon Peddie Research (JPR) to provide customer intimate consulting and market forecasting services where he explores the developments in computer graphics technology to advance economic inclusion and improve resource efficiency.

Recently named one of the most influential analysts, Peddie regularly advises investors in the technology sector. He is an advisor to the U.N., several companies in the computer graphics industry, an advisor to the Siggraph Executive Committee, and in 2018 he was accepted as an ACM Distinguished Speaker. Peddie is a senior and lifetime member of IEEE, and a former chair of the IEEE Super Computer Committee, and the former president of The Siggraph Pioneers. In 2015 he was given the Life Time Achievement award from the CAAD society.

Peddie lectures at numerous conferences and universities world-wide on topics pertaining to graphics technology and the emerging trends in digital media technology, as well as appearing on CNN, TechTV, and Future Talk TV, and is frequently quoted in trade and business publications.

Dr. Peddie has published hundreds of papers, has authored and contributed to no less than thirteen books in his career, his most recent, Augmented Reality, where we all will live, and is a contributor to TechWatch, for which he writes a series of weekly articles on AR, VR, AI, GPUs, and computer gaming. He is a regular contributor to IEEE, Computer Graphics World, and several other leading publications.