IBM introduced the eXtended Graphics Array XGA graphics chip and add-in board (AIB) in late October 1990, and it was the last graphics chip and AIB IBM would produce after having set all the standards for the industry it created.

The second revision (XGA-2 in 1993) was an upgrade, offering higher refresh rates (75 Hz and above, non-interlaced, up to at least 1024×768), improved performance, and a fully programmable display engine capable of almost any resolution within its physical limits.

IBM’s XGA combined an upgraded version of the VGA and included features from the 8514/A. The initial implementation of the XGA was as an on-board chip in the new PS/2 Model 90 and 90 XP. A stand-alone upgrade AIB (the IBM PS/2 XGA Display Adapter/A) was also available for existing PS/2s. The price was $1,095 for an XGA with 512KB VRAM and additional $350 for a memory upgrade to 1MB VRAM. That was a lot of money then (and would be $2,400 today).

The big philosophical and architectural change in the XGA was the integration of the VGA subsystem. In a way this was an admission of defeat, said Michal Necasek of the OS/2 Museum, as “IBM’s strategy of providing an on-board VGA chip with an additional high-resolution accelerator such as the 8514/A clearly hadn’t worked out.” It was also the way most subsequent non-IBM graphics would be constructed.

Because of the VGA integration, the XGA was not backward compatible with the 8514/A. Also, unlike the 8514/A, the entire XGA framebuffer could be directly accessed by the host CPU. Furthermore, up to eight XGAs could be run in one system through a bus-mastering capability in the XGA. However, because the VGA used fixed I/O and memory mapped address spaces, only one VGA could be active at a time in a system.

The XGA had several such unique features including a new 64×64 hardware sprite used as a mouse cursor. Earlier chips such as the EGA, VGA, and 8514/A used software to manage the mouse overlay, which at the time was not a trivial challenge.

The XGA is illustrated in Figure 2. 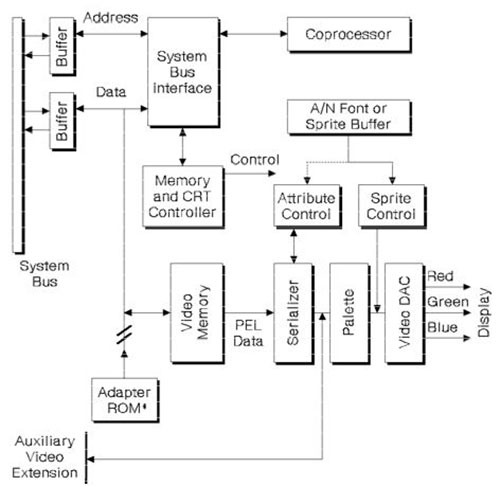 The coprocessor provided hardware drawing-assist functions throughout real or virtual memory. The following functions were built in with the XGA:

The original XGA supported 1, 2, 4, 8 bit-per-pixel colors at 2014 × 768 interlaced. In a non-interlaced mode, it could support or 16 bits per-pixel colors. The XGA output went directly to a VGA connector, either on the AIB or from the system board.

The serializer (Figure 2) and DAC converted the data in the video display buffer to the screen image. The video data was stored in the video display buffer in 1-, 2-, 4-, 8-, or 16-bit pixels. The number of bits per pixel was determined by the video mode the computer was operating in. Each memory location in the buffer held one pixel and corresponded to a specific location on the screen. The binary value of each 1-, 2-, 4-, or 8-bit pixel was used as an index into the palette to determine the color that was to be displayed at that location. If the computer was in the direct color mode, each pixel was 16 bits, and it did not use the palette to determine the colors. The XGA offered a lot of options to the application developer.

The serializer took the data from the video display buffer and converted it into a serial bit stream. If the pixels were 1, 2, 4, or 8 bits, the binary value of each pixel corresponded to one of the 256 memory locations in the palette. Each memory location contained 18 bits, divided into three 6-bit values that represented specific intensities of red, blue, and green. In the direct color mode (palette bypass mode), each 16-bit pixel was divided into a 5-bit red intensity value, a 5-bit blue intensity value, and a 6-bit green intensity value, for a total of 65,536 possible colors. The DAC then converted the digital color-intensity values to analog values for the monitor.

Although targeted for OS/2-based PS/2s, recognizing that not everyone was signing up for OS/2, IBM provided drivers for Windows 2.1 and 3.0, OS/2 1.2, and popular software packages like AutoCAD.

XGA-2. In 1992 IBM did an upgrade on the chip and introduced the XGA-2, which had built-in support for non-interlaced 1024 × 768 resolution and 1MB VRAM standard. The XGA-2 included a programmable PLL circuit and could support pixel clocks up to 90MHz; that enabled up to 75Hz refresh at 1024 × 768 resolution. Also, the 800 × 600 resolution was also supported, at up to 16bpp. The XGA-2 also had an improved DAC with 8-bits per channel, rather than 6 bits like the original XGA, which increase the displayable colors to 16 million. 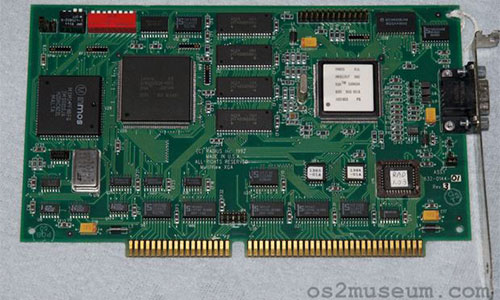 The PS/2E introduced in 1993 featured a full-sized internal PC speaker, two SIMM sockets, and an extended bank of memory soldered directly to the motherboard. It featured 1 MB of video memory for the onboard XGA-2 graphics adapter, which was attached to the ISA bus instead of the usual MCA bus.

The XGA was speculated about in the late 1980s. as word of its development leaked out of IBM’s Hursley Labs in the UK. Its architecture was quite advanced for the time with a linear framebuffer aperture, a flexible bus-mastering, a draw engine, and a hardware sprite cursor. When it was released most PC graphics AIBs were dumb framebuffer, upgraded VGA AIBs (with higher resolution to i800 × 600) known as SuperVGAs.

It took the rest of the PC graphics hardware industry several years to catch up with XGA’s capabilities. In many ways, the XGA was a classic 1990s design even if it never reached its full potential it could have easily supported up to 4MB VRAM as well as 24/32bpp True Color pixel formats, although it didn’t support the Truevision Targa format. (I’ll discuss the Targa board in an upcoming installment.)

How IBM offered to license the design of XGA

When the XGA came out, IBM floated the idea it would sell the chip to other companies and allow them to build AIBs with it as a second-source. However, in the spring of 1991, the company changed its position on that and instead offered to license the design. [1] Speculation at the time was that IBM didn’t want to reveal how much it cost them to build the chip and be accused of dumping.

Instead of selling the chips, IBM made the hardware specifications, the register interface, fully documented; and licensed the design to SGS-Thomson (Inmos), Intel and a few small companies like Integrated Information Technology. But the market had moved on from the character-based user interface into the bit-mapped graphics user interface (GUI), and the new chips and AIBs coming were known as GUI accelerators.

The XGA was the end of IBM’s leadership and dominance in the PC market, just 10 years after they invented and introduced the PC. Twelve years later IBM sold the entire PC product line to Lenovo and today that company is third largest PC supplier — one company’s castoff is another’s gold.

The next major development in PC graphics came with the introduction 3D graphics accelerators like 3Dfx’s Voodoo, ATI’s 3D Rage, and Nvidia’s Riva 128, which I’ll talk about in the following installments.

The PC graphics industry owes a debt of gratitude to IBM for establishing the standards and foundation of all graphics chips.