Intel has tried several times to get into the stand-alone graphics chip market. Its first attempt in 1982 was the cross licensing of the NEC 7220, [1] which became the Intel 82720. Then in 1983, Intel made the iSBX 275 Multibus-based add-in graphics board (AIB) with the chip.

Its second attempt was in 1988 when it released the 82786, [2] which it billed as a VLSI graphics coprocessor. It was designed to be used with Intel’s l6-bit 80186 and 80286, and 32-bit 80386 processors. “One of the key hardware extensions that supports the speed needed to do graphics and text is a graphics coprocessor,” said Bill Gates at the time. It used VRAM, and Intel said the 82786 can provide virtually unlimited color support and resolution.

In 1989, the company introduced the i860 [3] VLIW (Very Long Instruction Word) RISC processor (code name N10) that had a 32-bit ALU “Core” along with a 64-bit FPU (floating point unit) that was itself built in three parts: an adder, a multiplier, and a graphics processor. The i860 project was terminated in the mid-1990s and followed with the i960,[4] which with the FPU became the i960KB and was used in several graphics’ terminals.

One of the more Byzantine product developments, however, was Intel’s i740. It was started in 1995 when Martin Marietta and Lockheed merged to form Lockheed Martin Corporation, and became the world’s largest defense contractor. 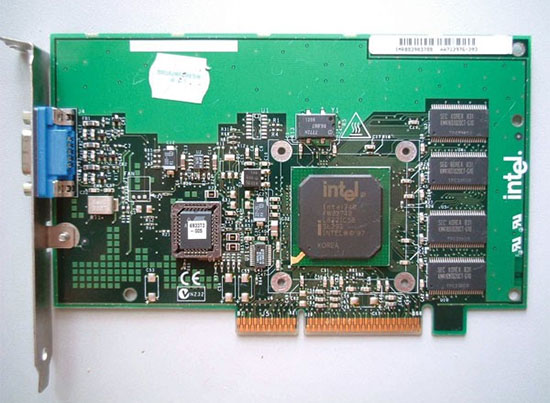 Lockheed Martin decided to market the graphics technology they had developed for flight simulators, into civilian use and in January 1995 set up the Real3D division who produced the R3D/100 chip. One of their first customers was Sega. This led to the company’s most successful product run, designing the 3D hardware used in over 200,000 Sega Model2 and Model3 arcade systems, two of the most popular systems in history.

In 1997, Intel purchased notebook graphics chipmaker Chips and Technologies for $430 million. However, no products taking advantage of technology acquired in the merger emerged.

In May 1996, Real3D formed a partnership with Intel and Chips and Technologies to introduce similar technology as an AIB for PCs, a project known as “Auburn.” This project became the AGP-based Intel i740 graphics processor, which Intel released in 1998. Intel also purchased a 20% minority interest in Real3D.[5]

It also includes dedicated video engines for support of video conferencing and other video applications. 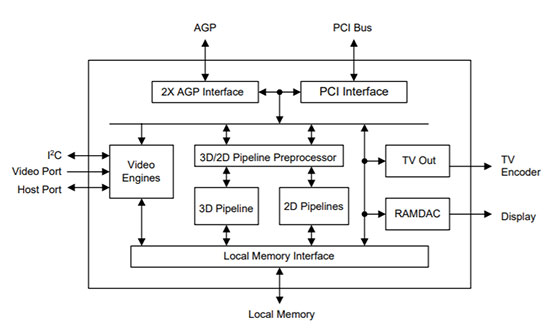 The DME architecture meant that full 2× AGP implementation was integrated into the Intel740 graphics accelerator with sideband operations supporting Type 1, Type 2, and Type 3 sideband cycles. That allowed 533 MB/s peak data transfers. Type 3 support permitted textures to be located anywhere in the 32-bit system memory address space. That was the good news, and the bad, and Intel used the new AGP bus as it had been intended, for texture rendering. Unfortunately texturing from main memory was much slower than from local memory and that approach never caught on—but it would take time to figure that out.

Intel had the brand, and had the OEM customers from the CPU side of their business. When the company offered the chip to the ODM and OEM suppliers, they went for it. In less than a year, almost a hundred partners had signed up to produce a 740-class AIB and began buying inventory. Intel shipped 4 million 740s between 1997 and 1998, about 4% of the market at the time. Approximately 45 companies showcased 59 boards containing an i740 chip at Computex in 1998.

But the processor couldn’t match the performance of the competitors like 3Dfx, ATI, Matrox, or Nvidia. But Intel could more than meet the price, and the other suppliers cried foul. Competitors released chips that outperformed the i740 forcing Intel to sell the chip at low prices to dealers in Asia.

In June 1998, the Federal Trade Commission filed an action against Intel for unfair business practices citing examples of misconduct, and allegedly predatory pricing. The i740 was selling for between $7 to $18 in wholesale markets in Taiwan, far below Intel’s posted volume price of $28; the company was accused of dumping. Also, motherboard vendors said it was easier to get Pentium II chips if the vendor also bought i740s.

By late 1999, Intel did two things, shut down the i740 project, and acquired the assets of Real3D from Lockheed Martin.[6] As Real3D crumbled, ATI hired many of the remaining employees and opened up an Orlando office. Prior to the sale of its assets to Nvidia, 3Dfx had sued Real3D over patent infringements. Intel settled the issue by selling all of the intellectual property back to 3Dfx, which ultimately ended up in Nvidia’s hands. Nvidia had SGI’s graphics development resources, which included a 10% share in Real3D. That triggered series of lawsuits, joined by ATI. The two companies were involved in lawsuits over Real3D’s patents until a 2001 cross-licensing settlement.

So, Intel exited the discrete graphics chip market for PCs, a market it entered less than 18 months earlier to fanfare and dismal sales. The company continued to produce integrated graphics chipsets, which combine a standard PC chipset with a graphics processor, but those products were targeted at computers selling for $1,000 and less.

The experience left a bad taste in Intel’s mouth and many in the company said the company would never again venture into graphics. Then in 2007 Intel tried again with the Larrabee project. That too ended in failure, and management again said never again. Those people are gone and today in 2019, the company is producing a new generation discrete graphics chip family.

The number 740 turned out to be an attractive designation, and AMD and Nvidia introduced new, unrelated 740 products. In December 2008, AMD announced the RV740 GPU, a 40-nm product. The company started mass production and it proved to be a very successful product.

Then in June 2013 Nvidia introduced the GeForce GT 740M, a DirectX 11 graphics chip targeted at midrange notebooks. It too turned out to be a very popular chip.

[5] Peddie, Jon, The History of Visual Magic in Computers: How Beautiful Images are Made in CAD, 3D, VR and AR, Springer London Heidelberg New York Dordrecht