All the industry, if not the entire world is talking about crypto-mining, and the value of Bitcoins. One of the benefactors of this explosive commodity market bubble has been the suppliers of add-in boards (AIBs) and subsequently the purveyors of GPUs. Motherboard and power supply unit (PSU) suppliers have also benefited.

AIB average selling prices (ASPs) prices in certain segments (high-end and midrange) have soared due to supply and demand, and a bit of price gouging in the channel.

Exciting stuff, but the tip of the iceberg so to speak. There are several classes of GPUs in PCs. 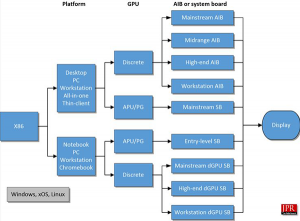 Crypto mining is just a portion of just two segments in just one platform. 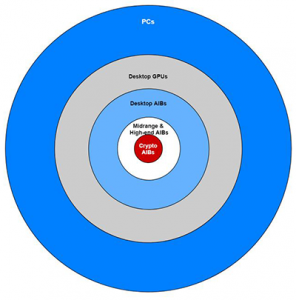 Is crypto-mining the center of the universe?

Prior to the surge in buying of AIBs for crypto-currency mining, AIB prices were flat to declining slightly subject to seasonality and product introduction dates, up till about Q4’16, as the following chart shows.

Looking into the segments you can see it has been the high-end and midrange that have enjoyed the uplift from crypto mining. 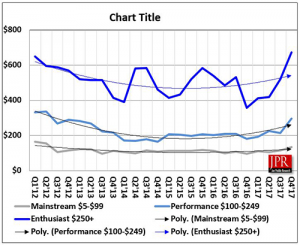 And if you just look at the high-end for the last four quarters you see the real excitement, and what’s happening to the ASP of AIBs. 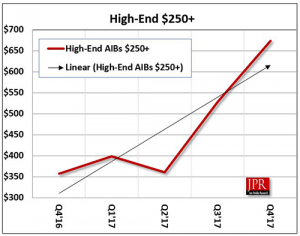 Now the question is, where are those higher prices/profits/margins going? Are AMD and Nvidia charging more for their chips, kits, and boards? We don’t have Nvidia’s latest financial data, but we can see a rise in their and AMD’s margins. Mind you, GPU/AIB sales are part of a very diverse mix of products from both companies, but nonetheless, they are enjoying increased margins. 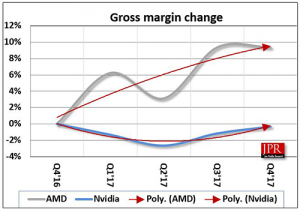 It’s not just GPUs; memory prices are going up too. Although the chip makers are enjoying some of the uplift in prices, the supply chain is getting the majority of the gains. We don’t think the board fabricators like Foxconn are gaining much other than a surcharge for increased orders. The AIB brands like Sapphire, EVGA, MSI and others are raising their prices and the distributors like Amazon, Newegg, and Best Buy are getting the biggest benefits, and even going so far as to deny sales to known miners. 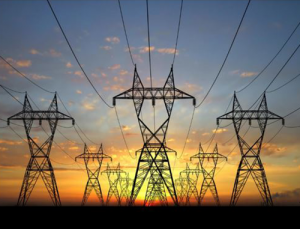 Trading watts for Ethereum and Bitcoins isn’t exactly like Money for Nothing, especially when the capital equipment costs are included. But so far, and as long as there is an inflationary push on crypto currencies, there is sufficient payoff that people will participate. The original consumers of high-end AIBs were of course the gamers. They too have joined the ranks of miners and put their systems up for use in a pool when they aren’t being used for gaming. 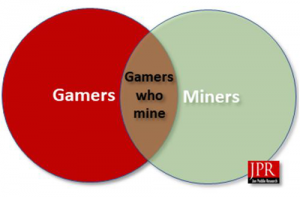 Figure 6: Gamers mine, but do miners game?

The risk for the AIB and GPU suppliers remains the deflation of crypto-currency prices. When the price of crypto-coins drops below a certain point, and it’s different for every region driven by electricity rates, the AIBs that the miners so hungrily gobbled up will no longer have value to the them. When that happens, depending upon the individuals, the AIBs will either be dumped in the landfill, or dumped on eBay. That will take sales away from the AIB supply chain for a quarter or two.

However, there is another possibility and that is that the miners will offer their rigs as rendering farms. That would give them extended utilization potential, and most likely drive down the price for farm rendering since supply will exceed demand.

This week Ethereum and Bitcoin, as well as other eCoins were down. Not significantly, less than a percent, but swings of a percent in an over-charged highly volatile commodities market like that means swings of tens of thousands of U.S. dollars to some of the miners.

Most of the gamers we’ve spoken to who mine have a more sanguine attitude about it, and happily take what they can make while not thinking about the energy costs.

The unescapable irony of it all is that the crypto currencies, which are supposed to be outside of the traditional banking and currency systems are all based on the U.S. dollar. So, if crypto currencies succeed in being disrupters and replace conventional token exchange money, how will they be valued?