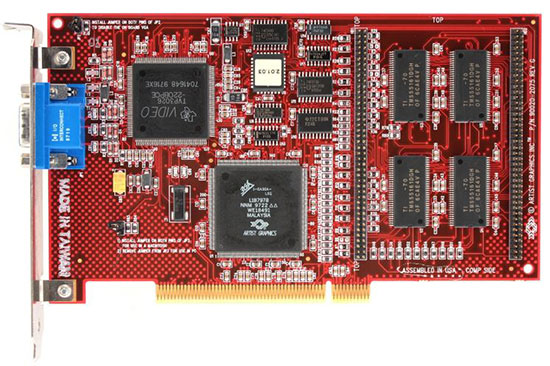 Artist Graphics founded 1979 by Horace and Robert Beale, in Minneapolis released their first add-in board, the Artist 1 in November of 1982, based on an NEC 7220 and sporting a gigantic 1024 × 768 resolution.

As the computer graphics board industry shifted from commodity graphics chips to proprietary graphics chips, Artist graphics developed their own graphics chip, the GPX, in late 1992 for their Xj1000 add-in board. Explicitly designed for accelerating CAD software and display manipulations it accelerated wireframe rotations and object shadings due to the Xj1000’s Z-buffer support and onboard rendering engine.

The chip was a technical success, but the company couldn’t generate enough volume to offset the costs of development. However, in 1995 Artist Graphics tried again with their 3GA chip.

Shown in public for the first time at the Design Engineering conference in Chicago in March 1995, Artist Graphics revealed their new 3-D accelerator chip, the 3GA. It was a VRAM-based 64-bit controller with an AVGA core and management for a 16-bit Z-buffer. It supported dithering and Gouraud shading as well as texture mapping and six arithmetic operations. The AVGA could support 8-,16-, and 32- bit pixels, had a fast BLT engine, eight stencil modes, an 8 x 8 color expansion capability, and rectangular and arbitrary region clipping. 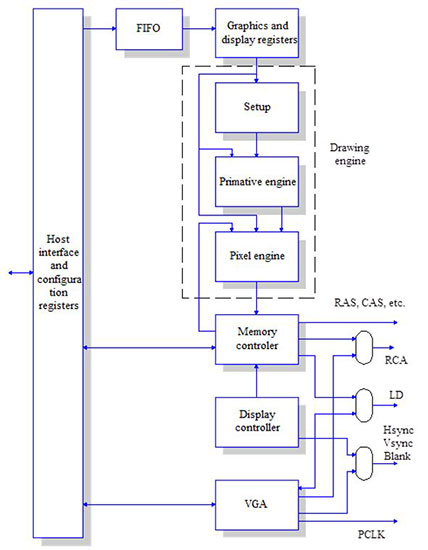 The chip had a FIFO a write buffer for drawing-engine commands that decoupled the CPU-host interface from the 3GA drawing engine. It contained 32 longword (32 bits) entries. The FIFO managed all pipeline issues with the drawing engine and would not overwrite a register if in use.

Graphics and display registers controlled most of the 3GA enhanced mode operations. They consisted of display control, frame buffer base addresses and pitches, coordinates, primitive, and interpolation registers.

The memory controller serviced requests from the display controller, host interface, and the pixel engine. It generated all the VRAM/DRAM control signals as well as the local device cycles needed to access the BIOS, ROM, DAC, and clock generator.

Table 1: specifications of the 3GA controller

The AIB exhibited excellent performance, based on 8 bits/pixel, 10-pixel lines, 50-pixel triangles using a 90 MHz Pentium with PCI. In first trials the chip exceeded its forecasts. The AIB came with 2 Mbytes of VRAM for an SRP of $395 ($724 in 2019)

Too much too late. As good as the design was, and it was very good, the development cost was so high, and the sales volume so low, combined with new commodity suppliers like ATI and Nvidia who were moving faster with superior products, the company just couldn’t compete, and in 1996, 16 years after it started, Artist Graphics folded.