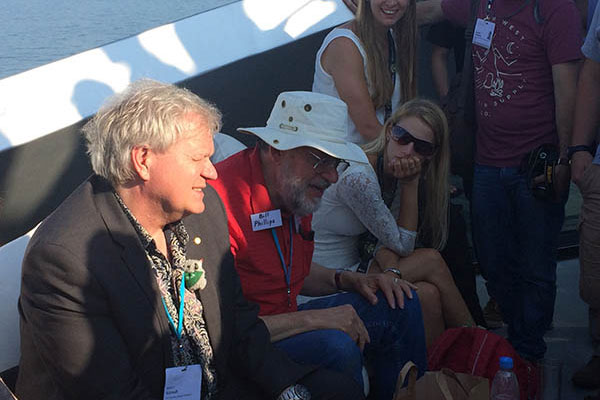 Imagine a crucible of intelligence, a nest of innovation. What would it look like?

This summer I was privileged to attend the largest amassment of physics Nobel laureates at one point in space and time: the 66th Lindau Nobel Laureate Meetings. The annual conference of scholarly celebrities takes place in Lindau, Germany, a quaint little village on the shores of Lake Constance near Austria and Switzerland. The subject of the meeting changes every year and brings together the laureates from a specific discipline and related areas. This year, with physics on the program, 29 physics and chemistry laureates attended, along with approximately 300 students and postdocs from 80 countries who had applied for and received travel grants.

The Lindau meetings were last dedicated to physics in 2012, when I also had the pleasure of attending. When I started writing about it, I couldn’t help but refer to Lindau as “nerd heaven.” It is an enchanted gathering, where laureates and ambitious young scientists come together to engage in stimulating dialog about deep and weighty scientific topics; where Nobels and even nobles (read on) mingle and share war stories of what it is like to heart science. It is a nexus where collaborations are launched, friendships are crafted, and inspiration is born.

My participation in both Lindau meetings was as a journalist, but not simply as a solicitous observer. In many cases, I was an active participant. I greatly enjoyed speaking with laureates, students, and special guests. This year’s prominent non-Nobelists included Vint Cerf, one of the fathers of the internet, who was there on an exchange program with another nerdy conference, the Heidelberg Laureate Forum.

Not surprisingly, we can learn a lot from partaking of the intelligence buffet that is Lindau. Here are some career tips that I gained from my time in nerd heaven:

Beyond the aforementioned career tips, Lindau demonstrates that with great physics comes great responsibility. Over and over, the young scientists at Lindau were told that the future of the world is in their hands. From Countess Bernadotte to the laureates themselves, speakers sent a continuous, central message that early-career scientists have a platform to make a difference. Physics-educated professionals have access to the kind of knowledge that is the gateway to making a positive difference for humankind. And that’s a big deal. Help humanity by using your physics superpowers for good—and maybe, sooner or later, you’ll meet the king of Sweden.

The author expresses appreciation to the organizers of the Lindau Nobel Laureate Meetings for a partial travel fellowship to attend.