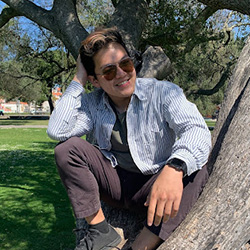 Not only did Ivan teach himself frontend development, design, and 3D modeling, but he’s also active with a publication reclaiming tech-optimism and a student-led venture fund. Continue reading to hear Ivan’s story and great advice he shares along the way.

Ivan I chose to study Applied Math and Computer Science because I was interested in ways of modeling the world through mathematical applications. Coming into college, I was unsure of what I wanted to study, only having this theoretical notion that I wanted to “create” things in the world (whatever that meant). But, I think that in a world that is constantly accelerating toward technological innovation, learning how to code allows you to do so many things (and also makes life easier!) It’s also given me the capacity to expand my interests that are in adjacent roles, whether that’s 3D Modeling, animation, or interaction design.

What Does a Typical Day or Week Look Like for You as a Student?

Ivan A typical week for me looks like a lot of classwork. This semester, specifically, I’m in two art studios that are both five hours long, and a two and a half hour seminar. This means that I’m out doing work late at night, studying with friends, or spending hours waiting for Illustrator to respond.

I also am involved with two other main things: Reboot, a publication and community reclaiming techn-optimism, and Dorm Room Fund, a student run venture fund, where I helped start our first LGBTQ+ student track. These involve a lot of calls and other documentation/writing.

I also love to cook, bake, and make things, so some of the day will be preparing syrups, fermentations, or dough as I’m just making random things to eat later in the week.

What’s Been Your Greatest Professional Challenge as a Member of the LGBTQ+ Community, and How Did You Overcome It?

Ivan The biggest challenge is figuring out how much of my personality and truly authentic self I can share when interviewing for jobs. As someone who grew up in a conservative household that didn’t talk about sexuality, I hid a lot of my identity for a while. While advocates and activists have allowed the country to make strides, the tech industry is still lacking in a lot of ways in respecting people’s personal identity and reflecting on their own personal perspectives and biases. During interviews, I’m always hesitant to share things I care about and how much I should talk about them.

I think I personally overcome this by finding places that concretely talk about their commitment to D&I and what ways they show it (actions mean more than words!) By having places that show this base level of understanding, I’ve felt more comfortable talking to people at these places because we have a base level of value alignment.

What Is One Piece of Advice You Can Give to LGBTQ+ Students and Early Career Professionals?

Ivan I’d say the biggest piece of advice is finding your clan of people who truly care about you (and if they’re also LGBTQ+, that’s great). I think that if you’ve never had the support system of other people, you never realize what you’re missing out on and finding out exactly how wonderful people can be. Events like Out in Tech or Out 4 Undergrad build programming like this to find people.

Based on Your Personal Experiences, What Is One Step Companies/Universities Can Take To Make Stem More Welcoming and Inclusive for Members of the LGBTQ+ Community?

Ivan One step universities and companies can do to improve inclusivity is to have more grassroots programming and supporting issues of mutual aid within the community. I think that while having support for LGBTQ+ in tech is important, I think genuinely supporting actions of the community / supporting other people doing important work is more important.

What Is One Thing in Your Field or within Computing That You’re Most Excited About?

Ivan I’m personally the most excited about the role computation plays in creativity, specifically this idea of building machine learning and deep learning models that allow videographers, animators, and other artists to do their jobs more easily. One of the biggest issues in the world is maintenance, and figuring out tools to solve this is inspiring.

Ivan is a senior at Brown University studying Applied Math and Computer Science. He is interested in creativity, storytelling, and vibes. He identifies as a gay man and is not out at work (only because he’s still a student!), but is out at school. He will be working as a design engineer at Loom working on the mobile team in the fall of 2022.

He started his journey in computer science in the fall of 2018, when he was unsure of what he wanted to do but knew he wanted to build things. He enjoyed math and his first year of classes, but was not satisfied with the amount of focus on creativity and exploration. He learned how to do other things like frontend development, design, and 3D modeling by himself, which has led him to do early engineering and product work at a variety of startups.