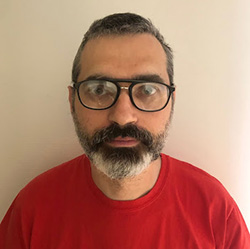 The Diversity and Inclusion Task Force presents Pride in STEM, with Alexander Serebrenik, Full Professor of Social Software Engineering at Eindhoven University of Technology, The Netherlands.

Alexander I have changed my research topics several times, mostly due to the realization that a more profound understanding of a problem required a complementary perspective. For example, to understand the quality of a software system it is important to understand how the system has been designed in the past and has been changed since then; however to understand the change we need to understand who has performed it, and who has reviewed it and why. This is how I went from software quality through software evolution to human aspects of software engineering.

What Does a Typical Day or Week Look Like for You as a Professor?

Alexander There is no typical day or week, one of the amazing aspects of my job is the enormous diversity of tasks. Usually, it is a combination of listening and talking (to students, colleagues, experts), reading (student papers, scientific articles), and writing (articles, reports). Sometimes, at the same time!

What’s Been Your Greatest Professional Challenge as a Member of the LGBTQ+ Community, and How Did You Overcome It?

Alexander I think that one of the challenges was to find the balance between being myself and integrating with the organization: while my managers have always known that I was gay, do I come out to colleagues, in particular, those coming from countries that criminalize same-sex relations? Do I invest time in organizing things for the LGBTQ community on top of the already high workload of an academic researcher?

Ultimately, I have decided that I want to do things that make me happy, meaning that I am out, and that I am involved in the community. I guess that this challenge is not necessarily specific to LGBTQ.

What Is One Piece of Advice You Can Give to LGBTQ+ Early Career Professionals?

Alexander Look for allies. Allies come from all walks of life and can be found in the most unexpected contexts. While not necessarily being LGBTQ+ or belonging to a minority group of any kind, they can make you feel welcome, provide genuine support, and further your career.

Who Is One Role Model Who You Personally Admire and Why?

Alexander I admire many colleagues that combine being able to perform top-notch research and actually being genuinely nice people. I have been extremely lucky to have met many of them at crucial points in my life.

While there are too many to name all of them, I would like to name Dr. Naomi Lindenstrauss, a teacher at Faculty of Science, The Hebrew University of Jerusalem. She has shown the undergrad me the beauty of logic programming and later has been my MSc co-advisor. Since I combined my MSc with my military service, Friday, normally a weekend day in Israel, was often the only option for me to come to the university. For several years in a row, she sacrificed one of her free days to come to the office and work with me, bringing delicious cookies to support the writing and coding process.

When I was close to finishing my Master’s, and considering a PhD, she told me that while she formally could supervise me, I would have been better off by working with a more internationally visible researcher. Now, having supervised multiple students myself, I can fully appreciate the meaning of her sacrifice.

Are There Any Issues in the Industry That the Computing Community Needs to Be Made Aware Of?

Alexander As an academic researcher, I can be hardly seen as a voice of the industry. This being said, it is important to realize that LGBTIQ+ people are still minoritized in computing and that numerous software systems worldwide are still based on the flawed cis- and heteronormative assumptions amplifying these. At the same time, there are numerous online and offline initiatives supporting LGBTIQ+ software engineers and software engineering students in many ways, and one can always support these.

What Are Some Ways Computing Can Aid the LGBTQ+ Communities That You’re Not Currently Seeing in Research or the Market?

Alexander I guess that what I miss is a reflection on how the software we are building can affect people, specifically, LGBTIQ+ people. For example, it is not uncommon to use names, emails, or usernames as primary keys in databases, making it impossible to change them, e.g., when people transition or change names for any other reason.

Amy Ko has recently described the experience of going through a laborious 100 hours to change her name.

Based on Your Personal Experiences, What Is One Step Companies/Universities Can Take To Make Stem More Welcoming and Inclusive for Members of the LGBTQ+ Community?

Alexander There are numerous steps one can take ranging from networking (creating LGBTIQ+ affinity groups, or more specifically LGBTIQ+ in STEM affinity groups) to celebrating famous LGBTIQ+ computer scientists and engineers (Alan Turing was not the only one!), from changing the way computing is taught (e.g., instead of telling the classical stable-marriages problem about women selecting men as potential husbands it can be equally well explained with companies selecting applicants as potential employees) to the ways universities provide support to LGBTIQ-related activities and LGBTIQ-individuals in need.

What Is One Thing in Your Field or within Computing That You’re Most Excited About?

AlexanderI am most excited by the fact that more and more people, researchers and practitioners alike, are understanding that software is created by humans for humans. While taking the human perspective on software leads to conversations that are not easy to have, it is important to have those conversations.

Alexander Serebrenik is a full professor of social software engineering at the Eindhoven University of Technology, The Netherlands. His research goal is to facilitate the evolution of software by taking into account social aspects of software development. His work tends to involve theories and methods both from within computer science (e.g., theory of socio-technical coordination; methods from natural language processing, machine learning) and from outside of computer science (e.g., organizational psychology). The underlying idea of his work is that of empiricism, i.e., that addressing software engineering challenges should be grounded in observation and experimentation, and requires a combination of the social and the technical perspectives. Alexander has co-authored a book “Evolving Software Systems” (Springer Verlag, 2014), and more than 200 scientific papers and articles. He is actively involved in the organization of scientific conferences and is a member of the editorial board of several journals. He has won multiple best paper and distinguished reviewer awards. Alexander is a senior member of IEEE and a member of ACM.