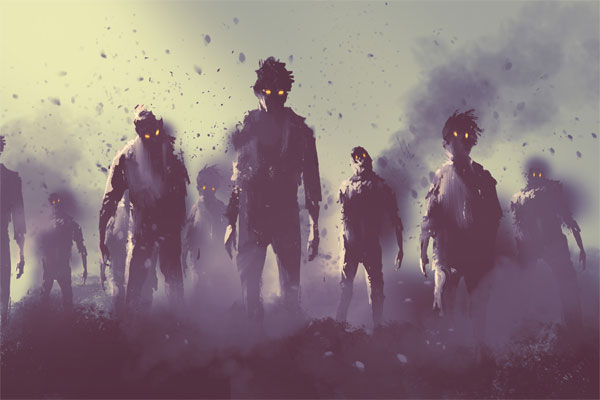 As a scientist or engineer, you are sure to encounter diverse personality types, leadership styles, and communication preferences. There is always something to be learned from collaborating with people who are experts in their arenas. Colleagues with varied approaches and skill sets can engender innovative solutions to your projects.

Part of the reason you benefit from your interactions with different people is that they are, in fact, people.

Unfortunately, every profession is contaminated with nonhumans who have the potential to inflict harm on your mental health and career. (And they don’t do the field any favors either.) They look like humans and they talk like humans, but their thought-processes are decidedly inhuman. They leave a trail of negativity wherever they go. They cause problems rather than solve them.

Perhaps you have already crossed paths with someone who appears to be human but is actually an otherworldly creature? The most dangerous of these may proactively work to bring you down. They are predatory and you must flee them.

The bodysnatchers appear in many forms, so it is a good idea to be able to recognize them in order to mitigate collateral damage to your career, reputation, and even wellbeing. But once you know their modus operandi and signatures, you’ll often be able to identify them from a safe distance.

Let’s investigate the spectrum of evil you may encounter. The continuum spans from “Run-for-your-life-or-risk-a-slow-and-painful-demise” to “This-guy-is-a-fool-so-I-will-avoid-him-as-much-as-possible.”

A zombie roams in search of brains. What is true in the 2007 movie I Am Legend is true in real life too. They don’t want to live harmoniously or work collaboratively with you. A zombie boss or colleague aims to tear you and your reputation to shreds and feed on the remains. Zombies drain your creativity, your energy, and your talent. You can’t reason with them or otherwise improve on the relationship with a zombie, because they are undead (meaning that they don’t change).

A postdoc recently told me a classic zombie story. He was at a major conference, proudly presenting a poster that represented a great deal of his research time and energy to passersby, when along slithered his PI with a group of followers. Right in front of the young investigator, she belittled his research, saying that it had no relevance in the field. The postdoc was mortified. How could his boss do this, he thought? After all, his research, papers, and poster reflect upon her, too. But zombies don’t think that way. Their only objective is to murder your soul. Shortly after this encounter, the postdoc realized that he was grappling with the undead. He arranged to switch to a lab in a new institution. He was right to get away.

As in film, real life features both “fast” and “slow” zombies. The fast are physically dangerous or aggressive: they harass their colleagues and subordinates sexually or emotionally, and this behavior can accelerate quickly. They don’t mind operating in the sunlight for others to see. But there are also slow zombies, who lurk in the shadows and undermine you behind your back. A subcategory of slow zombie is the “All About Eve” zombie (mostly seen in colleagues rather than bosses), who seek to supplant you in the most vicious and holistic of ways.

Although you can gain great wisdom from watching zombie movies, do recognize that not everything in the films translates perfectly. Career zombies, generally, are cunning, not dimwitted. Their slow movements are part of an intricate and devious plot to suck the life out of you over time. However, the more you know about zombie activity, the better chance you can avoid even taking a job with one.

For example, if, during your campus visit for a postdoc appointment, you find everyone crying in a corner, the chances are high that the PI is a zombie. It is better to know this before you invest your life in the research group than to have to leave your appointment mid-stream (and possibly brainless). If at any career point you are lured into a zombie roadblock, steer clear as strategically and as fast as you can.

Haters resist capture because they disguise themselves well. Unlike a zombie, which often reveals its nature very soon into a partnership—and sometimes even before—haters often lie in wait with a big grin and a pat on your back. Only later do they try and push you off the cliff. They seem friendly, full of good advice and ideas, and genuinely interested in your career health. Yet they, too, are dangerous.

Haters see you as a bright star and despise you for it. Perhaps you remind them of bad choices they made, or perhaps they are envious of your achievements. Regardless of reason, they don’t want you to triumph, and will thwart you rather than see you accomplish something that they want or have wanted for themselves.

Haters tend to deploy limiting and restrictive vocabulary through phrases like:

They often favor the words can’t, don’t, wouldn’t, or shouldn’t, especially in regards to your career progression. If someone ever tells you can’t do something in your career, do a self-check and determine if any of the following would happen if you proceeded as you intended. Could your proposed action

If the answer to any of those questions is no, then the person “encouraging” you not to pursue your ambition, might be a hater. If you hope to be a creative professional, filled with verve and imagination about your scholarship or projects, steer clear of haters. You can’t expect to have any sort of mutually beneficial collaboration with those who are angry with you because you did what they didn’t have the courage to do themselves. Haters gotta hate, so get the heck away from them.

This term denotes individuals who engage in inappropriate conversation and behavior or who use racist, sexist, or otherwise offensive language. Piggish behavior should not be tolerated. You have the right to go to work and do your job without anyone—boss or colleague—creating a hostile work environment. Take note of piggery, and report it as necessary to protect yourself and your colleagues from creatures whose mission is to push you into the mud. (Note: in using this metaphor, I mean no disrespect to actual pigs, which are totally adorable.)

Jerks tend not to mean you any direct harm, but their behavior offends. For example, I once went to a networking reception where I saw two professionals with whom I wanted to speak and perhaps work. They were facing each other and chatting. I inched up and tried to find an appropriate way to insert myself into the conversation. I didn’t interrupt them: I just stood nearby. Had they been classy, they would have moved their bodies to face me and form a triangle, at which point I could have officially joined their conversation. But instead of being thoughtful and welcoming, they acted like jerks and turned away from me. I was young at the time and didn’t understand exactly what was happening. Perhaps they didn’t see me, I naively thought. So I moved a little closer to the duo. They turned again—this time, so that they were now standing shoulder to shoulder and I was directly behind their backs!

It’s important to realize that, while jerks are all obnoxious, some of them are not motivated by spite or prejudice. They simply have inflated egos and a giant sense of entitlement. Of all the creatures listed here, jerks are the least nefarious. With some jerks, it is even possible to forge a partnership—provided that you can mindfully manage jerks. To do so requires an extremely strong sense of self, and sound expertise in diplomacy, negotiation, and risk assessment. If you pursue encounters with jerks and can still craft win–win alliances with them, then you have forged a silver bullet. The skills you have gained in collaborating with these challenging individuals will help you in many professional scenarios later on.

Diversity in science and engineering is something we should celebrate and embrace. Being able to share ideas and reach solutions with a variety of people is essential to your career. But the creatures described above are not going to help you or your team. So keep your eye out for intelligent, kind, and respectful professionals with whom you can collaborate, and eschew the zombies, haters, pigs and (many of the) jerks. Let those dastardly beings assemble their own research cabal and go work claw-in-claw together in some distant cave.

NOTE: Parts of this article were drawn from “Escape from the Zombie Boss or Colleague,” AGU Career Center, American Geophysical Union.