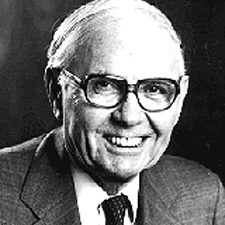 William Charles Norris (14 July 1911 near Red Cloud, Nebraska – 21 August 2006) was the pioneering CEO of Control Data Corporation, at one time one of the most powerful and respected computer companies in the world. He is famous for taking on IBM in a head-on fight and winning, as well as being a social activist who used Control Data’s expansion in the late 1960s to bring jobs and training to inner-cities and disadvantaged communities.

Norris entered the computer business just after World War II, when his team of US Navy cryptographers formed Engineering Research Associates to build scientific computers. ERA was fairly successful in these early days, but in the early 1950s a lengthy series of government probes into “Navy funding” drained the company and they sold out to Remington Rand. They operated within Remington Rand as a separate division for a time, but during the later merger with Sperry Corporation that formed Sperry Rand, their division was merged with UNIVAC. This resulted in most of ERA’s work being dropped, and a number of employees decamped and set up Control Data, unanimously selecting Norris as president.

Control Data started by selling magnetic drum memory systems to other computer manufacturers, but introduced their own mainframe, the CDC 1604, in 1958. Designed primarily by Seymour Cray, the company soon followed it with a series of increasingly powerful machines. In 1965 they introduced the CDC 6600, the first supercomputer, and CDC was suddenly in the leadership position with a machine ten times as fast as anything else on the market.

This was a significant threat to IBM’s business, and they quickly started a project of their own to grab the performance crown back from CDC. In the meantime they announced an advanced System 360 machine that was to be faster than the 6600. However the machine didn’t yet exist, and after carefully documenting sales lost to the IBM project, Norris launched a massive lawsuit against them in 1968. IBM was unable to finish its “6600 killer,” and CDC eventually won the suit, and was awarded $600 million in damages.

In 1967 Norris attended a seminar for CEOs where Whitney Young, head of the National Urban League, spoke about the social and economic injustices in the lives of young black Americans. This speech, along with a summer of violence in Norris’s hometown of Minneapolis, greatly disturbed him. He became a champion of moving factories into the inner-cities, providing stable incomes and “high-tech” training to thousands of people who would otherwise have little chance at either.

Another CDC project that Norris championed was the PLATO system, an online teaching and instruction system developed at the University of Illinois at Urbana-Champaign. The university developed most of the system on a CDC-1604 machine driving graphics terminals of their own design. In 1974 they reached an agreement with CDC to allow CDC to sell PLATO in exchange for free machines on which to run it. PLATO was released in 1975, but saw almost no use due to its high costs and complex maintenance. In the end PLATO did see some use as an employee training tool in large companies, but was never a success in the original education market.

Norris continually purchased new companies to fold into CDC, and eventually returned to the peripheral market in the 1970s. This later move proved particularly wise. It was also during the 1970s that Cray left to form his own company, and quickly drove CDC out of its leadership position in the supercomputer market. This left CDC in second place in a market for a small number of machines. Soon large Japanese companies were gobbling up what Cray didn’t. CDC tried to regain its footing in the supercomputer market by spinning off ETA Systems, in order to allow the developers to escape an increasingly ossified management structure inside CDC. However this effort failed and CDC gave up on the market entirely.

In the 1980s CDC was left primarily as a hard disk manufacturer, and their series of SCSI drives were particularly successful. But at this point the rest of the company crashed, and the board started pressing for Norris to step down. They were particularly harsh in blaming his social programs for their problems, although any connection is difficult, if not impossible, to find. He eventually realized there was little he could do to stop this course of action, and started an effort to place the company under the leadership of two hand-picked replacements. The stockholders didn’t go along with this, and Norris subsequently retired in January 1986.

William Norris died on 21 August 2006 in a nursing home in Bloomington, Minnesota after a long battle with Parkinson’s disease.