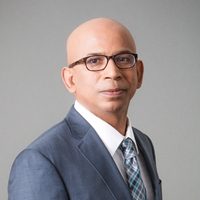 Viktor K. Prasanna (V. K. Prasanna Kumar) is the Charles Lee Powell Chair in Engineering and is a professor of electrical engineering and computer science at the University of Southern California (USC). He also serves as the director of the Center for Energy Informatics (CEI). He is the executive director of the USC-Infosys Center for Advanced Software Technologies (CAST). He is an associate member of the Center for Applied Mathematical Sciences (CAMS). He leads the Integrated Optimizations (IO) efforts at the USC-Chevron Center of Excellence for Research and Academic Training on Interactive Smart Oilfield Technologies (CiSoft) at USC and the demand response optimizations in the LA Smartgrid project. His research interests include high-performance computing, parallel and distributed systems, reconfigurable computing, cloud computing, and embedded systems. He has a BS in electronics engineering from the Bangalore University, an MS from the School of Automation, Indian Institute of Science, and a PhD in computer science from the Pennsylvania State University.

Prasanna has published extensively and consulted for industries in the above areas. He is the Steering Committee co-chair of the International Parallel & Distributed Processing Symposium (IPDPS) (merged IEEE International Parallel Processing Symposium (IPPS) and Symposium on Parallel and Distributed Processing (SPDP)). He is the Steering Committee chair of the International Conference on High-Performance Computing (HiPC). He has served on the editorial boards of the IEEE Transactions on Very Large Scale Integration (VLSI) Systems, IEEE Transactions on Parallel and Distributed Systems (TPDS), Journal of Pervasive and Mobile Computing, and the Proceedings of the IEEE. He serves on the editorial boards of the Journal of Parallel and Distributed Computing and the ACM Transactions on Reconfigurable Technology and Systems. From 2003–2006, he was the editor-in-chief of the IEEE Transactions on Computers. He was the founding chair of the IEEE Computer Society Technical Committee on Parallel Processing. He is a Fellow of the IEEE, ACM, and the American Association for Advancement of Science (AAAS). He is a recipient of the 2005 Okawa Foundation grant.