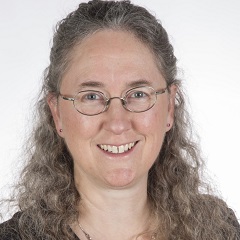 Susan H. Rodger is a Professor of the Practice in the Department of Computer Science at Duke University. She created the JFLAP educational software package for visualizing and experimenting with formal language concepts including automata, Turing machines, grammars, parsing, and proofs. JFLAP is used worldwide in courses on formal languages, discrete mathematics, compiler design, and artificial intelligence.

Rodger created the Adventures in Alice Programming Project that integrates computing into K-12 with the Alice programming language. She has organized four Alice Symposiums and thirty workshops, teaching over 400 K-12 teachers the Alice programming language and how to integrate computing into their disciplines. She has developed free Alice curriculum materials and is currently co-developing an online Alice Coursera course.

Rodger led other efforts including organizing workshops on JFLAP, integrating Peer-Led Team Learning (PLTL) into computer science, and career mentoring for students, faculty and researchers.  Rodger has supervised over 100 students, mostly undergraduates, on JFLAP, Alice and other topics. She is also known for making computer science themed cookies and integrating them into problem-solving activities that aid students in learning concepts.

Rodger is a long-time SIGCSE contributor, including having chaired the SIGCSE Board. She led the effort to create a new SIGCSE conference named ACM Global Computing Education Conference (CompEd) with its first conference in May 2019. She is currently on the CRA-W Board, chaired the AP Computer Science Development Committee, and served on the ACM Education Policy Committee. She was awarded the ACM Karl V. Karlstrom Outstanding Educator Award and the ACM Distinguished Educator award. She was a Finalist Candidate for the NEEDS Premier Award for Excellence in Engineering Education Courseware for the software JFLAP.

2019 Taylor L. Booth Education Award
“For leadership in undergraduate and K-12 computer-science education, and for broadening participation of women in computing.”
Learn more about the Taylor L. Booth Award