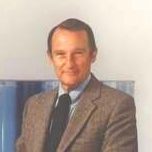 Seymour Roger Cray (28 September 1925 – 5 October 1996) was a U.S. electrical engineer and supercomputer architect who designed a series of computers that were the fastest in the world for decades, and founded the company Cray Research which would build many of these machines. Called “the father of supercomputing,” Cray has been credited with creating the supercomputer industry through his efforts. Joel Birnbaum, then CTO of HP, said of him:

In 1950, Cray joined Engineering Research Associates (ERA) in Saint Paul, Minnesota. ERA had formed out of a former United States Navy lab that had built code breaking machines, a tradition ERA carried on when such work was available. ERA was introduced to computer technology during one such effort, but in other times had worked on a wide variety of basic engineering as well.

Cray quickly came to be regarded as an expert on digital computer technology, especially following his design work on the ERA 1103, the first commercially successful scientific computer. He remained at ERA when it was bought by Remington Rand and then Sperry Corporation in the early 1950s. At the newly formed Sperry-Rand, ERA became the “scientific computing” arm of their UNIVAC division.

After several years of development their first product was released in 1976 as the Cray-1. As with earlier Cray designs, the Cray-1 made sure that the entire computer was fast, as opposed to just the processor. When it was released it easily beat almost every machine in terms of speed, including the STAR-100 that had beaten the 8600 for funding. The only machine able to perform on the same sort of level was the ILLIAC IV, a specialized one-off machine that rarely operated near its maximum performance except on very specific tasks. In general, the Cray-1 beat anything on the market by a wide margin.

Serial number 001 was “lent” to Los Alamos in 1976, and that summer the first full system was sold to the National Center for Atmospheric Research for $8.8 million. The company’s early estimates had suggested that they might sell a dozen such machines, based on sales of similar machines from the CDC era, so the price was set accordingly. But in the end well over 100 Cray-1s were sold, and the company was a huge success financially.

When asked what kind of CAD tools he used for the Cray-1, Cray said that he liked #3 pencils with quadrille pads. Cray recommended using the backs of the pages so that the lines were not so dominant. When he was told that Apple Computer had just bought a Cray to help design the next Apple Macintosh, Cray commented that he had just bought a Macintosh to design the next Cray.

Follow-up success was not so easy. While he worked on the Cray-2, other teams delivered the four-processor Cray X-MP, which was another huge success. When the Cray-2 was finally released after six years of development it was only marginally faster than the X-MP, largely due to very fast memory, and thus sold in much smaller numbers.

As the Cray-3 project started he found himself once again being “bothered” too much with day-to-day tasks. In order to concentrate on design, Cray left the CEO position of Cray Research in 1980 to become an independent contractor, working from a new lab in Colorado Springs, Colorado, near the site of NCAR and the earlier attempted Cray Laboratories.

In 1995, there had been no further sales of the Cray-3, and the ending of the cold war made it unlikely anyone would buy enough Cray-4’s to offer a return on the development funds. The company ran out of money and filed for Chapter 11 bankruptcy 24 March 1995.

Cray set up a new company, SRC Computers, and started the design of his own massively parallel machine. The new design concentrated on communications and memory performance, the bottleneck that hampered many parallel designs. Design had just started when Cray suddenly died as a result of a car accident. SRC Computers carried on development and now specializes in reconfigurable computing.

Cray frequently cited two important aspects to his design philosophy: remove heat, and ensure that all signals that are supposed to arrive somewhere at the same time do indeed arrive at the same time.

Cray addressed the problem of skew (See clock skew for examples, but it went beyond just that.) by ensuring that every signal path in his later computers was the same electrical length, so that values that were to be acted upon at a particular time were indeed all valid values. When required, he would run the traces back and forth on the circuit boards till the desired length was achieved, and he even employed Maxwell’s equations in design of the boards to ensure that any radio frequency effects which altered the signal velocity and hence the electrical path length were accounted for. He was a digital person who could think analog when required.

Cray was also proud of the cushions that surrounded his cylindrically shaped computers, atop the power supplies. He wanted to make life comfortable for the maintenance technicians.