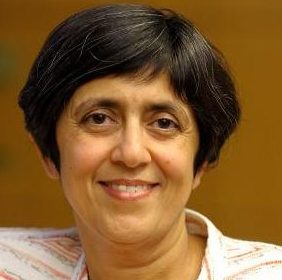 Sarita Adve is the Richard T. Cheng Professor of Computer Science at the University of Illinois at Urbana-Champaign. Her research interests are at the hardware-software interface with work spanning computer architecture, programming languages, operating systems, and applications. Her current research is on scalable system specialization and resiliency.

She co-developed the memory models for the C++ and Java programming languages based on her early work on data-race-free (DRF) models. More recently, her work questioned the conventional wisdom for memory models for heterogeneous systems and showed that DRF is a superior model even for such systems. She is also known for her contributions to cache coherence (she co-developed the DeNovo coherence protocol); hardware reliability (she co-developed software-driven approaches for hardware reliability in the SWAT project and the concept of lifetime reliability aware architectures and dynamic reliability management in the RAMP project); power management (she led the design of GRACE, one of the first systems to implement cross-layer energy management); exploiting instruction-level parallelism (ILP) for memory system performance (she co-authored some of the first papers on exploiting ILP for memory level parallelism); and evaluation techniques for shared-memory multiprocessors with ILP processors (she led the development of the RSIM simulator).

She is a recipient of the Anita Borg Institute Women of Vision award in innovation, the ACM SIGARCH Maurice Wilkes award, and an Alfred P. Sloan Research Fellowship. She is a fellow of the ACM and the IEEE and was named a University Scholar by the University of Illinois. She currently serves as the chair of ACM SIGARCH, on the ACM Council, and on the DARPA ISAT study group. She previously served on the board of the Computing Research Association and the NSF CISE advisory committee. For three of the last five years, Illinois has selected her students’ PhD theses as one of two nominations for the ACM doctoral dissertation award. She received the Ph.D. in Computer Science from Wisconsin and a B.Tech. in Electrical Engineering from IIT-Bombay.

2018 Ken Kennedy Award Recipient
“For research contributions and leadership in the development of memory consistency models for C++ and Java, for service to numerous computer science organizations, and for exceptional mentoring.”
Learn more about the Ken Kennedy Award