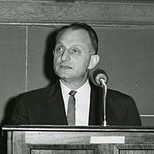 Samuel N. Alexander received his A.B. and B.S. from the University of Oklahoma in 1931, and earned his M.S. from the Massachusetts Institute of Technology in 1933. He was a laboratory engineer for Simplex Wire & Cable Company, a physicist in electronic instrumentation for the Navy, and senior project engineer for Bendix Aviation Corporation, before coming to the National Bureau of Standards in 1946. There he was chief of the Electronic Computer Laboratory, 1946–1954; head of Data Processing Systems Division, 1954–1964; and head of the Information Technology Division, 1964 until his death in 1967.

He worked on development of input-output devices for use with electronic computers and wrote specifications for and supervised the procurement of the UNIVAC computer. When delivery of this computer was delayed by design problems, he was assigned to direct the design and assembly of the NBS Interim Computer, later named SEAC. He also directed the development and design of DYSEAC.
Alexander was a member of several advisory groups and acted as special consultant to many U.S. government agencies.

He also acted as consultant to the government of Sweden, in 1956, and India, in 1957. He was a member of numerous professional societies, including the Association for Computing Machinery, the American Documentation Institute, the Institute of Electric and Electronic Engineers, and the Washington Academy of Sciences.