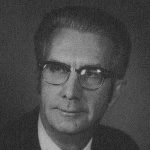 Rex Rice is a consulting engineer offering services to management in project planning and program reviews as well as engineering support in his specialty. In addition, he provides workshops and tutorials on company premises and for the IEEE Computer Society on VLSI design and supporting technologies.

Born on 27 January 1918 in Douglas, Arizona, he studied mechanical engineering at Stanford University, where he received his BA in June 1940. Upon graduation, he joined Douglas Aircraft, where he worked on tool design for some six years, rising to program manager, of A-26 wing assembly tooling. In 1946, Rex became a structures engineer at Northrup Aircraft where he worked for the next five years doing research on stress analysis of tapered wings with very wide rib spacing. This work introduced him to analog computers, the card-programmed calculator, and finally stored program digital computers. Between 1951 and 1955 he held the position of assistant director of computer services at Northrup, where he not only had an opportunity to participate in all aspects of the scientific digital computers evolution, but in 1954 he also had IBM build four IMB 797 hybrid plug-board controlled stored program digital computers for his company, which were capable of inverting matrices faster than any other computer in existence at the time.

In 1955, Rex Rice joined the IBM laboratory in Poughkeepsie, New York, where he participated in IBM’s first fully transistorized digital calculator, the IBM 608, and later became project manager of a precursor of the IBM 7070 system. He switched to the IBM Research Division in 1958 as manager of the Cost-Oriented Systems department, to study the problems of creating reliable systems from unreliable components, electronic systems packaging, and computer architecture, culminating in ADAM — a study for hardware implementation of a high-level language.

When Fairchild instruments offered him an opportunity to implement a high-level language computer back in California, he returned to establish the digital systems research department under Dr. Gordon Moore and created SYMBOL, the first operational computer demonstrating a direct hardware implemented high-level language. He also participated in enhancing LSI memory yield by a facto r of three, and co-invented the dual-in-line package which became an industry standard. Between 1970 and 1972, he held the job of director of memory systems operations at Fairchild Systems Technology Division, where he was responsible for the design and production, among others, of the world’s first large semiconductor memory, the 8 million bit ILLIAC IV LSI memory, and the two-million byte LSI memory systems for the IBM System/360 Model 67. He then held successive engineering management positions, including Director of Technology, Manager — Multi-chip Memories, Director of Memory Systems Operations, and Director of Advanced Systems Development, till he retired from Fairchild to become a consulting engineer in 1980.

Besides pursuing a professional career in engineering and management, Rex Rice devoted considerable time and effort to the IEEE Computer Society. He served five terms on the Board of Governors, chaired the COMPUTER Magazine Advisory Board, founded the COMPCON conferences and served on their standing committees, chaired the Awards Committee and the West Coast Operations Committee. He also served on the editorial advisory staff for COMPUTER DESIGN Magazine between 1968 and 1981, and as member of the Board of Directors of the Fairchild Federal Credit Union between 1979 and 1980.

Rex Rice was elected Fellow of the IEEE in 1969 “for contributions to the organization and applications of digital systems”, received the International Solid State Circuit Conference Outstanding Paper Award in 1964 for his paper, “Systematic Techniques for Digital Systems Realization”, and received a Special IEEE Computer Society Award “for contributions as architect of COMPCON and service as first standing committee chairman of COMPCON 1972–1975.” Also, Rex is a frequently invited speaker and session chairman in conferences and meeting dealing with computer architecture, design and packaging.