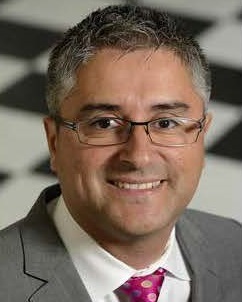 René Vidal is the Herschel L. Seder Professor of Biomedical Engineering and the inaugural Director of the Mathematical Institute for Data Science (MINDS) at The Johns Hopkins University, an Amazon Scholar, and a Chief Scientist at NORCE. He is also the director of the NSF-Simons Collaboration on the Mathematical Foundations of Deep Learning and the director of the TRIPODS Institute on the Foundations of Graph and Deep Learning. He received his B.S. degree in Electrical Engineering (valedictorian) from the Pontificia Universidad Católica de Chile in 1997, and his M.S. and Ph.D. degrees in Electrical Engineering and Computer Science from the University of California at Berkeley in 2000 and 2003, respectively. Dr. Vidal is co-author of the book “Generalized Principal Component Analysis” (Springer 2016), co-editor of the book “Dynamical Vision” (Springer 2006) and co-author of over 300 articles in machine learning, computer vision, signal and image processing, biomedical data science, robotics and control. Dr. Vidal has served as Associate Editor in Chief and Associate Editor of the IEEE Transactions on Pattern Analysis and Machine Intelligence, and Computer Vision and Image Understanding; Associate Editor of Medical Image Analysis, the SIAM Journal on Imaging Sciences and the Journal of Mathematical Imaging and Vision; and as Guest Editor of the International Journal of Computer Vision and the IEEE Signal Processing Magazine. He has also served as a General Chair, Program Chair or Area Chair for all major conferences in machine learning, computer vision, and medical image analysis. Dr. Vidal is the recipient of the 2021 Edward J. McCluskey Technical Achievement Award, 2018 D’Alembert Faculty Fellowship, 2012 IAPR J.K. Aggarwal Prize, the 2009 ONR Young Investigator Award, the 2009 Sloan Research Fellowship, and the 2005 NFS CAREER Award. He has also received best paper awards at JVCI 2015, ICCV-3DRR 2013, PSIVT 2013, CDC 2012, MICCAI 2012, CDC 2011 and ECCV 2004. Dr. Vidal is a Fellow of the AIMBE, Fellow of the IEEE, Fellow of the IAPR and a member of the ACM and SIAM.