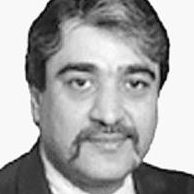 Pradeep K. Khosla received B. Tech (Hons) from IIT (Kharagpur, India), and both MS (1984) and PhD (1986) degrees from Carnegie Mellon University. He served as Asst Professor of ECE and Robotics (1986–1990), Associate Professor (1990–1994), and Professor (1994– ), Founding Director (1/1997–6/1999) of Institute for Complex Engineered Systems (which includes the former Engineering Design Research Center – a NSF ERC). He is currently the Philip and Marsha Dowd Professor of Engineering and Robotics, and Head of Electrical and Computer Engineering Department at Carnegie Mellon. Prior to joining Carnegie Mellon, he worked with Tata Consulting Engineers and Siemens (1980–1982) in the area of real-time control.

From January 1994 to August 1996 he was on leave from Carnegie Mellon and served as a DARPA Program Manager in the Software and Intelligent Systems Technology Office (SISTO), Defense Sciences Office (DSO) and Tactical Technology Office (TTO) where he managed advanced research and development programs, with a total budget exceeding $50M in FY96, in the areas of Information based Design and Manufacturing, Web based Information Technology Infrastructure, Real-Time Planning, and Distributed AI and Intelligent Systems, Real-Time Embedded Software, Sensor-based Control, and Collaborative Robotics.

Professor Khosla’s research interests are in the areas of internet-enabled collaborative design and distributed manufacturing, collaborating autonomous systems, agent-based architectures for distributed design and embedded control, software composition and reconfigurable software for real-time embedded systems, reconfigurable and distributed robotic systems, integrated design-assembly planning systems, and distributed information systems. His research is multidisciplinary and has focused on the theme of “creating complex embedded and information systems through composition of and collaboration amongst building blocks”. He is involved in Electrical and Computer Engineering, Design, and Robotics education both at the graduate and the undergraduate level. He was a member of the committee that formulated a curriculum for the multidisciplinary PhD program in Robotics at Carnegie Mellon. He was also a member of the Wipe the Slate Clean Committee that created a new 4 year undergraduate ECE degree curriculum at CMU. In support of the new curriculum he developed the Introductory Freshman level course “Introduction to Electrical and Computer Engineering” that emphasizes the notion of Teaching in Context.

Professor Khosla is a recipient of the Inlaks Fellowship, United Kingdom, the Carnegie Institute of Technology Ladd award for excellence in research in 1989, ASEE 1999 George Westinghouse Award for Education, 2 NASA Tech Brief awards, and was elected as an IEEE Fellow in January 1995. He was appointed a Distinguished lecturer for the IEEE Robotics and Automation Society for 1998-99. Professor Khosla’s research has resulted in 2 books and more than 200 journal articles, conference papers and book contributions.

Professor Khosla served as a member of the Technical Advisory Board of AFWPAFB and NASA-JPL projects. He has been an invited participant to the Department of Commerce workshops on the Intelligent Manufacturing Systems program and USA-Japan R&D consortia and collaboration, and DARPA ISAT study panels. During his tenure at DARPA he served on several panels and review committees. He is a consultant to several industries in the USA. He serves on the technology Advisory Board of Beam Inc., and is a co-founder and Chairman of the Board of K2T inc. — a high tech company based in Pittsburgh.