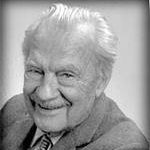 Metropolis is best remembered as one of the founding fathers, along with Stan Ulam and John von Neumann, of the Monte Carlo method, which was used to design the first atomic bomb. Today, Monte Carlo is used for diverse applications, such as simulating traffic flow on highways, forecasting financial fluctuations in the stock market, and modeling radiation transport in the earth’s atmosphere.

Shortly after the end of World War II, von Neumann had become fascinated with ENIAC, the first electronic, digital, general-purpose, scientific computer. He told Metropolis about this machine and asked if he and his colleagues could come up with a problem for it to solve. Working with Stan Frenkel, Metropolis had ENIAC solve a problem regarding the thermonuclear bomb.

In 1948, Carson Mark, then head of the Theoretical Division at Los Alamos, suggested that Metropolis return to the Laboratory and establish a facility there. Metropolis accepted the offer, and returned to lead the team that would design MANIAC, one of the first electronic digital computers. In 1956, MANIAC II (a more powerful, user-friendly version of MANIAC) was developed.

In 1957, Metropolis went to the University of Chicago, where he founded and directed the university’s Institute for Computer Research and worked on MANIAC III. He returned to Los Alamos in 1965, where he spent the remainder of his career.

Metropolis became a senior fellow in 1980 and in 1987 became the first Los Alamos employee honored with the title “emeritus” by the University of California. He was awarded the Pioneer Medal by the Institute of Electrical and Electronics Engineers and in 1995 he was honored with a daylong colloquium, “The Future of Science,” held at the laboratory.