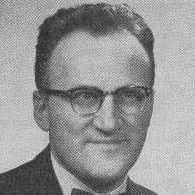 Morris Rubinoff was born in 1917 and received his B.A. in 1941, M.A. in 1942, and Ph.D. in 1946, from the University of Toronto. Rubinoff’s early training was in mathematics and physics as an undergraduate and in physics as a graduate. The interest in computing began at the University of Toronto where a post World War II project supported by the Canadian Army was underway. Rubinoff did calculations of trajectories using a method known as the Richardson method on a desk calculator. Rubinoff’s Ph.D. work involved the measurement of spinning projectiles in space. After completing the Ph.D., Rubinoff succeeded in obtaining a half-time position in the physics department and a half-time position in the computation laboratory at Harvard University. Rubinoff assisted Aiken in building MARK III, a vacuum tube computer. From 1946 to 1948, Rubinoff participated actively in the design of many of the MARK machines attributes. These included amplifiers, and algorithms to implement logic. Comments on the individuals associated with the Computing Lab at Harvard and the various projects they worked on. In 1948, Rubinoff joined the Institute for Advanced Study (IAS) at Princeton University under the direction of Julian Bigelow. At Princeton, Rubinoff was a design engineer involving hardware issues and later an output printer. This printer was a wet process in which electrolytic paper generated color by passing an electric current through the dampness. He discusses colleagues working at IAS and their contributions to the machine. In 1950, Rubinoff went to the Moore School at the University of Pennsylvania where he reconstructed and reconfigured the computer activities. At the same time, Rubinoff became a consultant with Philco Corporation in 1957 and ultimately took a two year leave of absence from the Moore School. In 1959, Rubinoff returned to the Moore School as a Professor of Electrical Engineering. Some colleagues mentioned include Chaim L. Pekeris, Howard Aiken, Benjamin Moore, Way Dang Woo, Grace Murray Hopper, Richard Bloch, Robert Campbell, Harry Fuller, Julian Bigelow, John von Neumann, Ralph Slutz, Willis Ware, and Issac Auerbach.