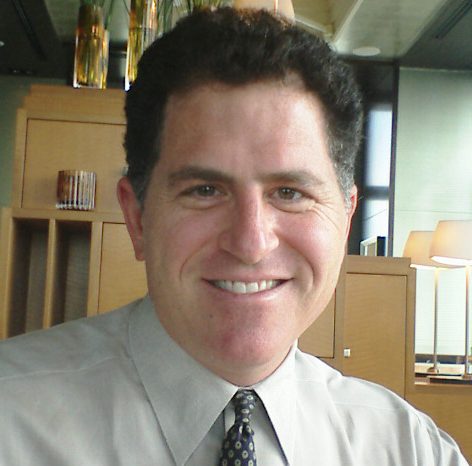 Michael Saul Dell (born 23 February 1965, in Houston, Texas) is an American businessman and the founder and CEO of Dell, Inc.

Dell was born into a family which liberally practiced Judaism. The son of an orthodontist and a stockbroker, Dell attended Herod Elementary School in Houston, Texas. Dell had his first encounter with a computer at the age of 15 when he broke down a brand new Apple II computer and rebuilt it, just to see if he could. Dell attended Memorial High School in Houston where he did not excel academically. During that time he did however exhibit formidable business instincts selling subscriptions for the Houston Post. Selling to newlyweds Dell made $18,000 and bought a car and three computers with it.

While at the University of Texas at Austin, he started a computer company called PC’s Limited in his room in Dobie Center. The company became successful enough that, with the help of an additional loan from his grandparents, Dell dropped out of the university at the age of 19 to run PC’s Limited, which later became Dell Computer Corporation, then ultimately Dell, Inc.

Over time, and despite a number of setbacks (including laptops that caught on fire in 1993, temporarily losing the consumer market to Gateway in the mid 1990s, and others), Dell survived the race to become the most profitable PC manufacturer in the world, with sales of $49 billion and profits of $3 billion in 2004. As Dell expanded its product line to more than computers, shareholders voted to rename the corporation Dell, Inc. in 2003.

On 4 March 2004, he stepped down as CEO of Dell but stayed as chairman of the board, while Kevin B. Rollins, then president and COO, became president and CEO. On 31 January 2007, Dell returned as CEO, succeeding Kevin Rollins (who resigned earlier in the day).

Accolades for Dell include: “Entrepreneur of the Year” from Inc. magazine; “Man of the Year” from PC Magazine; “Top CEO in American Business” from Worth Magazine; “CEO of the Year” from Financial World, Industry Week and Chief Executive Magazine. At a speech before the Detroit Economic Club in November, 1999, Dell defined the “3 C’s” of e-commerce (content, commerce, and community) while articulating his strategy for offering a superior customer experience online.

Dell currently resides in Austin, Texas with his wife, Susan, and their children, Kira, Alexa, and fraternal twins Zachary and Juliette.