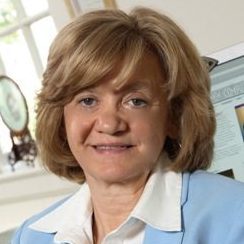 Mary Lou Soffa is the Owen R. Cheatham Professor in the Computer Science Department at the University of Virginia where she served as Department Chair from 2004-2012. From 1977 to 2004, she was a Professor of Computer Science at the University of Pittsburgh and also served as the Dean of Graduate Studies in the College of Arts and Sciences from 1991 to 1996. Her research interests include optimizing compilers, virtual execution environments, software testing, program analysis, software security, instruction level parallelism, and multi-core architectures. Her papers have received a number of best paper awards as well as designation of one of the 40 most influential papers in 20 years to appear in the Programming Language Design and Implementation Conference, the premier conference in one of her area.

Soffa received the Anita Borg Technical Leadership award in 2011. She was elected an ACM Fellow in 1999 and received the Presidential Award for Excellence in Science, Mathematics and Engineering Mentoring in the same year. She was honored with a Girl Scout Woman of Distinction Award in 2003 and received the Computing Research Association (CRA) Nico Habermann Award in 2006 for outstanding contributions toward increasing the numbers and successes of underrepresented students. She served for ten years on the Board of CRA and continues as a member of CRA-W, the committee on the status of women in computer science and engineering of the CRA. She has served on the Executive Committees of both ACM SIGSOFT and SIGPLAN, as well as conference chair, program chair, or program committee member of numerous conferences. She has been a distinguished speaker and keynote speaker at a number of conferences, research labs and universities. She had directed 30 Ph.D. students to completion, half of whom are women, and over 60 M.S. students. She currently serves on the ACM Publication Board and was reelected in 2012 to serve on the ACM Council.

2012 Ken Kennedy Award
“For contributions to compiler technology and software engineering, exemplary service to the profession, and lifelong dedication to mentoring and improving diversity in computing.”
Learn more about the Ken Kennedy Award