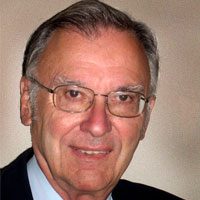 Marcian “Ted” Hoff, Jr. (b. 1937) joined Intel in 1968 as employee number 12 and is credited with devising the idea of a universal processor to replace custom-designed circuits. He is credited with having invented the microprocessor in 1971, although he proposed the architectural idea and an instruction set formulated with Stanley Mazor in 1969, and Federico Faggin independently created the innovative silicon design, essential to its realization, in 1970–1971. In 1980, Hoff was named the first Intel Fellow, the highest technical position in the company. He stayed in that position until 1983 when he went to Atari as vice-president of technology.

Hoff earned his bachelor’s degree in electrical engineering from the Rensselaer Polytechnic Institute in 1958. He received his first two patents while working during his undergraduate college summers for the General Railway Signal Corp. of Rochester, New York. He then received a National Science Foundation Fellowship to enroll in Stanford University, where he received his master’s degree (1959) and Ph.D. (1962).

Hoff was most recently chief technologist at Teklicon, an intellectual property consulting firm, at which he served from 1990 to 2007.