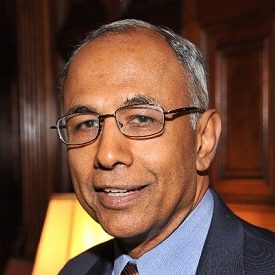 K. Mani Chandy is the Simon Ramo Professor, Emeritus at the California Institute of Technology. He got his Bachelors in Electrical Engineering at the Indian Institute of Technology, Madras, in 1965; MS in Electrical Engineering at the Polytechnic Institute of New York in 1966; and a PhD in Operations Research at the Massachusetts Institute of Technology in 1969. He taught at the University of Texas at Austin, from 1969 to 1987, and at the California Institute of Technology from 1987 to 2014. He served as chairman of the Computer Science department at U.T. and as Executive Officer at Caltech. He has written books on performance modeling, concurrent programming, and event processing. He has written several papers on queuing networks, computer and communications performance modeling, distributed simulation, the development and verification of concurrent programs, compositional programming notations for parallel programs, and the detection of critical events from streams of data.

Chandy received the A. A. Michelson Award from the Computer Measurement Group in 1985 for his work on computer performance modeling. He became a Fellow of the IEEE in 1990. He was inducted into the United States National Academy of Engineering in 1995 for “contributions to computer performance modeling, parallel discrete-event simulation, and systematic development of concurrent programs.” He received the IEEE Koji Kobayashi Award in 1996 for “fundamental contributions to the theory and practice of computer and communications performance modeling.” His paper on distributed global snapshots, with Leslie Lamport, was placed in the ACM Operating Systems “Hall of Fame” in 2013 and was awarded the ACM Edsger W. Dijkstra prize in 2014.

2017 Harry H. Goode Memorial Award
“For seminal contributions to distributed and parallel programming, including the development of the UNITY formalism.”
Co-recipient with Jayadev Misra
Learn more about the Harry H. Goode Award