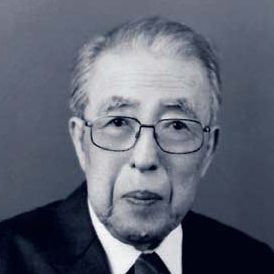 Mamoru Hosaka, born in 1920, graduated from the University of Tokyo in 1942, majoring in aeronautical engineering. After 1946, he belonged to the Research Institute of the Japan National Railways (JNR-RI), where he did research on dynamics of railway vehicle, by which he received the Doctor of Engineering degree from the University of Tokyo. In autumn 1951, he happened to read an article on the digital computer and began to study its technology by himself.

In 1954, he realized that it could be utilized for control of main activities in the railway system. Though at that time there were no computers in Japan, he persuaded his colleagues and executives of the Institute to begin study on computer applications for system control and then his research work was authorized in the Institute. In July 1955, he got a basic idea for seat reservation for trains. Then he found out the idea could be realized simply with magnetic drum memory, a part of which is used as delay line registers. In late 1957 the Central Office of the JNR, recognizing his group’s efforts, decided to construct a prototype Seat Reservation system for new four Business Express trains between Tokyo and Osaka By the end of 1959 the system was completed and named MARS 1. (Magnetic Automatic Reservation System, afterward, Multi-Access Reservation System).