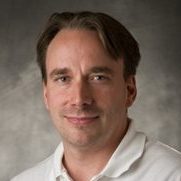 Torvalds was born on 28 December 1969 in Helsinki, Finland. He enrolled at the University of Helsinki in 1988, graduating with a master’s degree in computer science. His M.Sc. thesis was titled Linux: A Portable Operating System.

An avid computer programmer, Linus authored many gaming applications in his early years. After purchasing a personal computer with an Intel 386 CPU, he began using Minix, an Unix-inspired operating system created by Andrew Tanenbaum for use as a teaching tool. Torvalds started work on a new kernel, later to be named “Linux,” in the fall of 1991 and after forming a team of volunteers to work on this new kernel, released V1.0 in the spring of 1994.

In 1996, Torvalds accepted an invitation to visit the California headquarters of Transmeta, a start-up company in the first stages of designing an energy saving central processing unit (CPU). Torvalds then accepted a position at Transmeta and moved to California with his family. Along with his work for Transmeta, Torvalds continued to oversee kernel development for Linux.

In 2003, Torvalds left Transmeta to focus exclusively on the Linux kernel, backed by the Open Source Development Labs (OSDL), a consortium formed by high-tech companies, which included IBM, Hewlett-Packard, Intel, AMD, RedHat, Novell and many others. The purpose of the consortium was to promote Linux development. OSDL merged with The Free Standards Group in January 2007 to become The Linux Foundation. Torvalds remains the ultimate authority on what new code is incorporated into the standard Linux kernel.