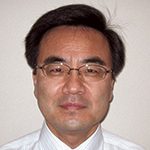 Kunio Uchiyama, Invited Senior Researcher of National Institute of Advanced Industrial Science and Technology in Japan, received his BS, MS, and Ph.D. degrees from the Tokyo Institute of Technology. He had worked for the Central Research Laboratory of Hitachi since 1978 and served as Corporate Officer and Chief Scientist of Hitachi. He led R&D for the commercial SuperH microprocessors from the early 1990s, and he was awarded Japan’s national Medal of Honor with the Purple Ribbon in 2004 for his contribution to the development of commercial high-performance, low-power microprocessors. He also led the New Energy and Industrial Technology Development Organization project in Japan on heterogeneous multicore technologies from 2007 to 2010. He was a guest editor of IEEE Micro in 2005 and served as a general chair of the Asia and South Pacific Design Automation Conference sponsored by IEEE CAS/CEDA in 2015. He has also been a general chair of the IEEE Symposium on Low-Power and High-Speed Chips, sponsored by the IEEE Computer Society since 2019. He is a member of the IEEE Computer Society, Solid-State Circuits Society, and the Institute of Electronics, Information and Communication Engineers (IEICE). He is a Fellow of IEEE and IEICE.