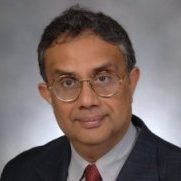 Krishna V. Palem is the Ken and Audrey Kennedy Professor of Computing at Rice University. His research interests, focused on all aspects of embedded computing, include adaptive computing, algorithms, compilers, low-energy computing and nanoelectronics. Palem is a pioneer in the area of embedded systems research, having founded one of the first academic laboratories dedicated to the field in 1994, at the Courant Institute of Mathematical Sciences at NYU. His work at NYU led to the widely used TRIMARAN system.

One aspect of his NYU research was aimed at the convenient and fast use of reconfigurable hardware by software (application) developers. Based on this research, Palem innovated architecture assembly which was commercialized through Proceler, Inc., a company he co-founded in 2000. Architecture Assembly was a nominee (one of four) for  the bellwether Analysts’ Choice Award (Outstanding Technology) in the field of Digital Processing, 2001.

Palem has played a leading role in enabling an international community of research in embedded and hybrid systems. He serves on the editorial board of the ACM Transactions on Embedded Computing Systems. He has chaired advisory bodies for funding initiatives in Embedded and Hybrid Systems at the U.S.’s NSF and Singapore’s A*Star, and he co-founded the IEEE-ACM Compilers, Architectures and Synthesis for Embedded Systems (CASES) conference, in 1998.

Palem was a member of the research staff at IBM’s Thomas J. Watson Research Center, a Schonbrunn Fellow at the Hebrew University of Jerusalem 1999–2000, and a Moore Distinguished Scholar at Caltech, 2007. He is a fellow of the ACM and the IEEE. He leads the I-Slate project, recognized as “one of Seven World-Changing Technologies” at IEEE’s 125th Anniversary, 2009. His Probabilistic Chips (PCMOS) were feted as “one of 10 technologies that we think are most likely to change the way we live” by  MIT Technology Review, 2008.