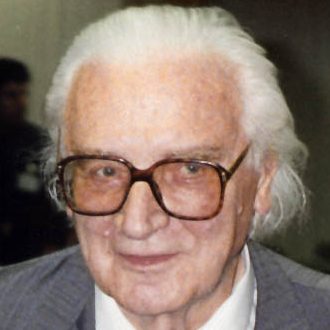 Konrad Zuse (22 June 1910 Berlin – 18 December 1995 Hünfeld) was a German engineer and computer pioneer. His greatest achievement was the world’s first functional program-controlled Turing-complete computer, the Z3, in 1941 (the program was stored on a punched tape). He received the Werner-von-Siemens-Ring in 1964 for the Z3.

Zuse also designed the first high-level programming language, Plankalkül, first published in 1948, although this was a theoretical contribution, since the language was not implemented in his lifetime and did not directly influence early languages. One of the inventors of ALGOL (Rutishauser) wrote: “The very first attempt to devise an algorithmic language was undertaken in 1948 by K. Zuse. His notation was quite general, but the proposal never attained the consideration it deserved.”

In addition to his technical work, Zuse founded one of the earliest computer businesses in 1946. This company built the Z4, which became the second commercial computer leased to ETH Zürich in 1950. Due to World War II, however, Zuse’s work went largely unnoticed in the UK and the U.S.; possibly his first documented influence on a U.S. company was IBM’s option on his patents in 1946. In the late 1960s, Zuse suggested the concept of a Calculating Space (a computation-based universe).

There is a replica of the Z3, as well as the Z4, in the Deutsches Museum in Munich.

The Deutsches Technikmuseum Berlin in Berlin has an exhibition devoted to Zuse, displaying twelve of his machines, including a replica of the Z1, some original documents, including the specifications of Plankalkül, and several of Zuse’s paintings.

1965 Harry H. Goode Memorial Award
“For his contributions to, and pioneering efforts in, automatic computing; for independently proposing the use of the binary system and floating-point arithmetic; and for designing the first program-controlled computer in Germany — one of the earliest in the world.”
Learn more about the Harry H. Goode Award