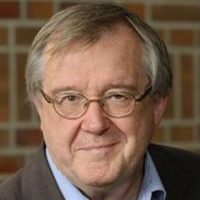 Klaus Schulten is Swanlund Professor of Physics at the University of Illinois at Urbana-Champaign where he directs the NIH Biotechnology Research Center on Macromolecular Modeling and co-directs the NSF Physics Frontier Center on Living Cell Physics.

His research focuses, since four decades, on the questions how biomolecules in living cells assemble and cooperate to carry out their functions and which organizational principles and physical mechanism are involved the processes. The research, done jointly with experimental laboratories, required the development of mathematical as well as computational methods and the integration of new technologies. Key discoveries from his group resolved the mechanical motion of biological cells,  sensory processes in vision and animal navigation, light energy harvesting in photosynthesis as well as learning in neural networks.  Schulten also pioneered the use of computational modeling for the development of nanodevice sensors in biomedicine.

In his research Schulten incorporated quantum mechanical and classical mechanical theories into non-equilibrium statistical mechanical descriptions as well as into computer simulations.  Schulten was the first to demonstrate that parallel computers could be practically employed to solve the classical many-body problem in biomolecular modeling.

Besides his research in biological physics, Schulten has devoted much effort to the development of computational biology software.  Thousands of researchers worldwide use his group’s software for molecular graphics (VMD) and modeling (NAMD), the latter jointly developed with colleague Laxmikant Kale. Presently his group is developing a new computational method called Molecular Dynamics Flexible Fitting  that assists cell biologists in solving the structures of very large macromolecular machines found in living cells.