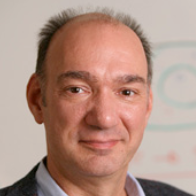 Kevin Bowyer is the Schubmehl-Prein Professor of Computer Science and Engineering at the University of Notre Dame and also serves as Chair of the Department. Professor Bowyer’s research interests range broadly over computer vision and pattern recognition, including biometrics and data mining. Over the last decade, he has made numerous advances in multiple areas of biometrics, including iris recognition, face recognition, and multi-biometric methods. His research group has been active in support of a variety of government-sponsored biometrics research programs, including the Human ID Gait Challenge, the Face Recognition Grand challenge, the Iris Challenge Evaluation, the Face Recognition Vendor Test 2006, and the Multiple Biometric Grand Challenge. Professor Bowyer’s most recent book is the Handbook of Iris Recognition, edited with Dr. Mark Burge.