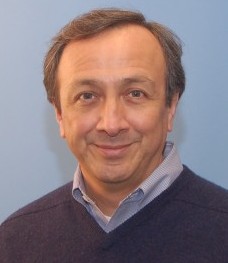 J.J. Garcia-Luna-Aceves received the B.S. degree in Electrical Engineering from the Universidad Iberoamericana, Mexico City, Mexico in 1977; and the M.S. and Ph.D. degrees in Electrical Engineering from the University of Hawaii at Manoa, Honolulu, HI in 1980 and 1983, respectively. He is a Distinguished Professor of Computer Science and Engineering at the University of California, Santa Cruz (UCSC). He has been a Principal Scientist at the Palo Alto Research Center (PARC), a Center Director at SRI International (SRI), a Visiting Professor at Sun Laboratories, and a Principal of Protocol Design at Nokia.

Dr. Garcia-Luna-Aceves is a Life Fellow of the IEEE; was elected a Corresponding Member of the Mexican Academy of Sciences in 2013; and is a Fellow of the Association for Computing Machinery (ACM), the American Association for the Advancement of Science (AAAS), the Asia-Pacific Artificial Intelligence Association (AAIA), and the National Academy of Inventors (NAI). He received the 2017 George E. Pake Golden Oak Award from PARC, the 2016 IEEE MILCOM Technical Achievement Award, the 2012 IEEE Communications Society Ad Hoc and Sensor Networks Technical Committee (AHSN TC) Technical Recognition Award, and the 2011 IEEE Computer Society Technical Achievement Award.

He holds 70 U.S. patents, has published three books and more than 500 journal and conference papers, and has supervised more than 40 Ph.D. dissertations. He is the recipient of Best-Paper Awards at ACM PA-WASUN 2022, the International Conference on Ubiquitous Networking `22, IEEE LCN 2022, ACM ICN 2020, IEEE IPCCC 2018, the European Wireless Conference 2010, IEEE MILCOM 2008, IEEE MASS 2008, SPECTS 2007, IFIP Networking 2007, IEEE MASS 2005, and the 1998 IEEE International Conference on Systems, Man, and Cybernetics. He also received the SRI International Exceptional-Achievement Award in 1985 and 1989.