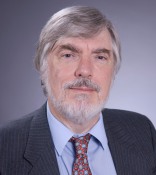 John Rushby is a Program Director and SRI Fellow with the Computer Science Laboratory of SRI International in Menlo Park California, where he leads its research program in formal methods and dependable systems.

His research interests center on the use of formal methods for problems in the design and assurance of safe, secure, and dependable systems.

Dr. Rushby is a former associate editor for Communications of the ACM, IEEE Transactions on Software  engineering, and Formal Aspects of Computing, and was recently a member of a National Research Council study that produced the report “Software for Dependable Systems: Sufficient Evidence?”