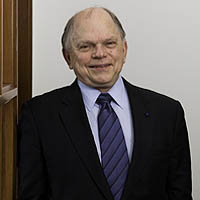 John William Poduska, Sr., a technological entrepreneur and independent business consultant, has had a distinguished career, from working at NASA to founding several leading computer and technology companies.

Following positions at NASA’s Research Center in Cambridge, Mass., where he worked on various Apollo missions, and Honeywell Information Systems, Poduska co-founded Prime Computer in 1972. In 1979 he founded Apollo Computer, which was one of the first creators of graphical workstations in the 1980s (the company was acquired by Hewlett-Packard in 1989). Next, he founded Stellar Computer, which merged with Ardent to become Stardent Computer and is now known as Advanced Visual Systems, located in Waltham, Mass. He serves on numerous boards, including Novell, a global software company; Anadarko Petroleum; and Interactive Supercomputing.

His awards include the McDowell Award of the Institute of Electrical and Electronic Engineers and the MIT Corporate Leadership and Distinguished Industrial Achievement Award. He is a member of the National Academy of Engineering.

Poduska holds a bachelor’s, master’s, and doctoral degree in electrical engineering from the Massachusetts Institute of Technology. He is a trustee at Bentley University and has served on the boards of the Boston Ballet, the Wang Center, and the Boston Lyric Opera. His daughter Lily is a member of Skidmore’s Class of 2009.