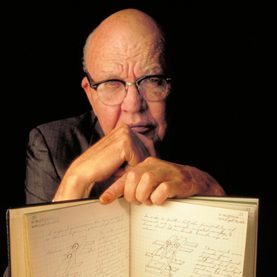 There are few men whose insights and professional accomplishments have changed the world. Jack S. Kilby was one of these men. His invention of the monolithic integrated circuit — the microchip — 50 years ago at Texas Instruments (TI) laid the conceptual and technical foundation for the entire field of modern microelectronics. It was this breakthrough that made possible the sophisticated high-speed computers and large-capacity semiconductor memories of today’s information age.

Kilby grew up in Great Bend, Kansas. With B.S. and M.S. degrees in electrical engineering from the Universities of Illinois and Wisconsin respectively, he began his career in 1947 with the Centralab Division of Globe Union Inc. in Milwaukee, developing ceramic-base, silk-screen circuits for consumer electronic products.

In 1958, he joined TI in Dallas. During the summer of that year working with borrowed and improvised equipment, he conceived and built the first electronic circuit in which all of the components, both active and passive, were fabricated in a single piece of semiconductor material half the size of a paper clip. The successful laboratory demonstration of that first simple microchip on September 12, 1958, made history.

Kilby went on to pioneer military, industrial, and commercial applications of microchip technology. He headed teams that built both the first military system and the first computer incorporating integrated circuits. He later co-invented both the hand-held calculator and the thermal printer that was used in portable data terminals.

In 1970, he took a leave of absence from TI to work as an independent inventor. He explored, among other subjects, the use of silicon technology for generating electrical power from sunlight. From 1978 to 1984, he held the position of Distinguished Professor of Electrical Engineering at Texas A&M University.

Kilby officially retired from TI in 1983, but he maintained a significant involvement with the company throughout his life.

Kilby was the recipient of two of the nation’s most prestigious honors in science and engineering. In 1970, in a White House ceremony, he received the National Medal of Science. In 1982, he was inducted into the National Inventors Hall of Fame, taking his place alongside Henry Ford, Thomas Edison, and the Wright Brothers in the annals of American innovation.

Kilby held over 60 U.S. patents. He was a Fellow of the Institute of Electrical and Electronics Engineers (IEEE) and a member of the National Academy of Engineering (NAE). He was awarded the Franklin Institute’s Stuart Ballantine Medal, the NAE’s Vladimir Zworykin Award, the American Society of Mechanical Engineers’ Holley Medal, the IEEE’s Medal of Honor, the Charles Stark Draper Prize administered by the NAE, the Cledo Brunetti Award, and the David Sarnoff Award. On the 30th anniversary of the invention of the integrated circuit, the Governor of Texas dedicated an official Texas historical marker near the site of the TI laboratory where Mr. Kilby did his work.

In 2000, Kilby was awarded the Nobel Prize in Physics for his part in the invention of the integrated circuit.

Kilby passed away on 20 June 2005, in Dallas following a brief battle with cancer. Yet, his legacy lives on.

From Jack Kilby’s first simple circuit has grown a worldwide integrated circuit market whose sales in 2007 totaled $219 billion. These components supported a 2007 worldwide electronic end-equipment market of nearly $1,500 billion. Such is the power of one idea to change the world.