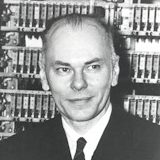 Howard Hathaway Aiken, the son of Daniel and Margaret Emily (Mierisch) Aiken, was born at the turn of the century, on 8 March 1900, in Hoboken, New Jersey. The boy was reared, however, in Indianapolis Indiana, where he attended the Arsenal Technical High School. After his graduation in 1919, Aiken matriculated at the University of Wisconsin, where he majored and did outside work in electrical engineering. Aiken received his B.S. in electrical engineering from Wisconsin in 1923, and went to Harvard for post-graduate studies. He received his M.A. (1937) and Ph.D. (1939) degrees in physics from Harvard, where he remained as a faculty instructor first, and as an associate professor later.

As early as 1936, Aiken had dreamed of building a large-scale calculator, but found it difficult to interest many other people in the project. He learned, in reading Passages From the Life of a Philosopher by Charles Babbage, that the early nineteenth century inventor had had a similar idea almost a hundred years before. By 1939, already at Harvard, Aiken, in collaboration with engineers at the International Business Machines engineering laboratory in Endicott, New York, began research which was to last about five years in the design and construction of the automatic sequence-controlled calculator.

Aiken’s first calculator, the Mark I, was assembled in February 1944, and presented by the International Business Machines Corporation to Harvard University in 1944. The Mark I generated immediate interest of the United States Navy. As it became increasingly clear that World War II was to be a mathematician’s war -World War I had been called a chemist’s war- Aiken’s researches came under the heading of strategic wartime work, and the professor himself became “one of the wartime mystery men” of the campus. Commissioned a commander in the United States Naval Reserve, Aiken served as officer-in-charge of the calculation project of the Navy Board of Ordnance. The Mark I was used in gunnery, ballistics, and naval design by the Navy Bureau of Ships until January 1946, at which time it was transferred to the Navy Board of Ordnance.

It was not until late in 1946, after the war had ended, that Aiken was released to Harvard on a full-time basis. He returned as a professor of applied mathematics and, in addition, in 1947 he became director of the university’s new computation laboratory at its dedication. The completed unit was to join all departments of the natural sciences under one roof, in Harvard’s projected “science city.” It was there that Aiken began the construction of the Mark II, which was to dwarf its predecessor, being three times as big and twelve times as fast. A detailed study of the automatic sequence-controlled calculator, written by Aiken and Grace M. Hopper, appeared in several 1946 issues of Electrical Engineering, published by the American Institute of Electrical Engineers.

Aiken was a member of the American Association for the Advancement of Science, Sigma Xi (the science research honor society), the National Research Council, and the Institute of Radio Engineers. He received the IEEE Edison Medal in 1970, “for a meritorious career of pioneering contributions to the development and application of large-scale digital computers and important contributions to education in the digital computer field.” Aiken died in 1973.

1964 Harry H. Goode Memorial Award
“For his original contribution to the development of automatic computers that led to the first large-scale, general-purpose, automatic digital computer ever to be put in operation; for his continuous work in the field of digital computers as an engineer; and for the knowledge and inspiration imparted to many as a teacher.”
Learn more about the Harry H. Goode Memorial Award