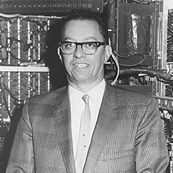 Herman Lukoff was instrumental in developing the ENIAC (Electronic Numeric Integrator and Calculator), the first electronic digital computer, in the early 1940s. He was also involved with the development of the EDVAC (Electronic Discrete Variable Automatic Computer) and UNIVAC (Universal Automatic Computer) I, the first American computer not used for war purposes and credited with starting the data processing industry. He was directly responsible for designing the UNIVAC’s I/O (input/ output) features, and introduced efficient and cost-effective mass production to the manufacture of computers, which, up until then, had been custom-built.

Lukoff was born in Philadelphia in 1923 and was educated in the Philadelphia public schools. At age 11, he followed a diagram published in a newspaper and built a two-tube radio. He continued his education, earning a bachelor of science degree in electrical engineering from the University of Pennsylvania’s Moore School of Electrical Engineering in 1943.

As a student, he designed electronic devices to test components of the ENIAC, and following graduation, he was selected to work on the ENIAC project with J. Presper Eckert and John W. Mauchly. But less than a year later, he was drafted into the Navy and served in the South Pacific as a radio and radar maintenance engineer.

After his stint with the Navy, he returned to the Moore School in Philadelphia in 1946 to work with Eckert and Mauchly on the EDVAC computer. He helped develop the innovative circuitry to control the mercury delay line acoustic storage. When Eckert and Mauchly decided to launch their own computer company, called Eckert-Mauchly Corp, Lukoff followed them. The company was the first to mass-produce computers.

In 1950, Eckert-Mauchly was sold and became the UNIVAC Division of Remington Rand (which later became Sperry Rand). Lukoff’s career took off with his work on the UNIVAC. He continued to develop I/O devices, and he also created a unique logic and electronic circuit for controlling magnetic tape operations. In 1955, Sperry Rand put Lukoff in charge of the design team to build the UNIVAC-LARC (Livermore Automatic Research Computer). Instead of using radio tube transistors, it used a processor chip, letting it perform multiple tasks at high speed without overheating. The project was successfully completed on time in 1961.

Lukoff became head of Sperry Rand’s engineering department in 1960 and directed development of UNIVAC III and UNIVAC 1050 data processing systems, and the Fastrand I mass storage and Uniservo III-C magnetic tape systems. He advocated research into ferrite core elements, which was invented by Wang Labs, and plated wire technology, which led to Sperry Rand’s UNIVAC division becoming one of the world’s largest manufacturers of magnetic cores.

He died of leukemia in 1979 at the age of 56, survived by his wife, Shirley, and four children. His death came just months before publication of his book “From Dits to Bits: A Personal History of the Electronic Computer” (Forest Grove, Oregon: Robotics Press, 1979), describing his career as a computing pioneer. The title refers to how his interest in the Morse code dits of telegraphy led to his working with the information bits of computing. For his contributions to computing, the IEEE (Institute of Electrical and Electronic Engineers) Computer Society presented Lukoff with its W. Wallace McDowell Award in 1969, “For his insight and leadership in solving primary problems of early computers and his continuing contributions that have paved the way for tomorrow’s computing systems.” Lukoff also is one of just a few posthumous recipient of the organization’s Computer Pioneer Award. He was honored with this award “for significant contributions to concepts and developments in the electronic computer field which have clearly advanced the state of the art in computing.”