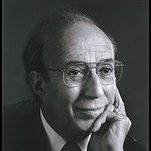 Herman Heine Goldstine was born in Chicago in 1913. He attended the University of Chicago, graduating Phi Beta Kappa with a degree Mathematics in 1933, a master’s degree in 1934 and a PhD. in 1936. For three years he was a research assistant under Gilbert Ames Bliss, an authority on the mathematical theory of exterior ballistics. In 1939 Goldstine began a teaching career at the University of Michigan, until the United States’ entry into World War II when he joined the Army. In 1941, he married Adele Katz who was an ENIAC programmer and wrote the technical description for ENIAC. He had a daughter and a son with Adele, who died in 1964. Two years later he married Ellen Watson.

In retirement, Goldstine became executive director of the American Philosophical Society in Philadelphia between 1985 and 1997 where he was able to attract many prestigious visitors and speakers.

Goldstine died on 16 June 2004 at his home in Bryn Mawr, Pennsylvania after a long struggle with Parkinson’s disease. His death was announced by the Thomas J. Watson Research Center in Yorktown Heights, New York where a post-doctoral fellowship was renamed in his honor.

1979 Harry H. Goode Memorial Award
“In recognition of his support and major contributions to the development of the ENIAC; his pioneering work on the logic, design and coding of electronic computers; his leadership role in the design, construction and use of the IAS machine at the Princeton Institute for Advanced Study; his significant contributions to the theory and practice of matrix computations; his encouragement of young scientists and mathematicians to explore the use of electronic computers; and his penetrating analysis of the history of computing.”
Learn more about the Harry H. Goode Memorial Award