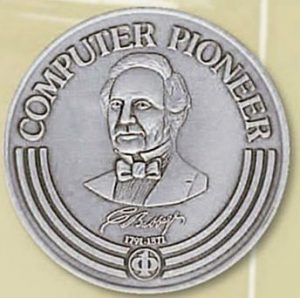 Gordon D. Goldstein received a degree in electrical engineering from Clarkston College of Technology at Potsdam, New York. In 1941 he began work as a civilian inspector of radio and navigation equipment with the Army Signal Corps. During the mid 1940’s to 1950 he was a development engineer with the Washington Institute of Technology. From 1950 to 1951 he was chief engineer with computers for the Census Bureau in Philadelphia. In 1951, he joined the Navy Department, working first as an electronics scientist with the Naval Ordnance Laboratory, then in research and development at the David Taylor Model Basin’s applied mathematics laboratory, and finally, in 1956, with the ONR Information Systems Branch until his retirement in 1980. He was involved with applications of the Univac I, including a Russian translation project.

Goldstein was editor of ONR’s Digital Computer newsletter, and a member of the Interagency Group for Research and Information Systems (IGRIS). He was a frequent seminar speaker and participant, especially in the fields of linguistics and machine translation.

Goldstein was also active in professional societies. He was a treasurer of the American Federation of Information Processing Societies (AFIPS), and very involved in the Spring Joint Computer Conferences (SJCC), acting as chairman of the proceedings committee for SJCC ’64, and secretary of the SJCC ’71 steering committee. He was a member of the public information committee of the International Federation of Information Processing Societies (IFIP), a member of the IFIP organizing committee in 1963, and part time congress committee member for IFIP Congress ’65.