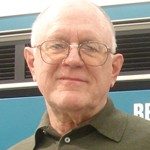 Gordon Bell is a Researcher Emeritus at Microsoft’s Silicon Valley Laboratory. He spent 23 years at Digital Equipment Corporation (part of HP) as Vice President of Research and Development.  He was the architect of various mini- and time-sharing computers and led the development of DEC’s VAX. Bell has been involved in, or responsible for, the design of products at Digital, Encore, Ardent, and a score of other companies.

Bell has a B.S. and M.S. degrees from MIT (1956–1957), D. Eng. (hon.) from WPI (1993) and D.Sci and Tech (hon.) from CMU (2010). During 1966–1972 he was Professor of Computer Science and Electrical Engineering at Carnegie-Mellon University.  In 1986–1987 he was the first Assistant Director of the National Science Foundation’s Computing Directorate, CISE. He led the National Research and Education (NREN) Network panel that became the Internet and was an author of the first High Performance Computer and Communications Initiative.

Bell has authored books and papers about computer structures, lifelogging, and startup companies. In April 1991, Addison-Wesley published High Tech Ventures: The Guide to Entrepreneurial Success. In 2009, Dutton published Total Recall written with Jim Gemmel, and describing the journey to storing one’s entire life. He is a founder and board member of the Computer History Museum, Mountain View, CA.

Bell is a member of various professional organizations including the American Academy of Arts and Sciences (Fellow), American Association for the Advancement of Science (Fellow), ACM (Fellow), IEEE (Fellow and Computer Pioneer), and the National Academy of Engineering, National Academy of Science and the Australian Academy of Technological Science and Engineering. His awards include: IEEE Computer Society Computer Pioneer and Wallace McDowell Awards and ACM/IEEE CS Eckert-Mauchly Award, the IEEE Von Neumann Medal, and the 1991 National Medal of Technology.

2014 Seymour Cray Computer Engineering Award
“For his exceptional contributions in designing and bringing several computer systems to market that changed the world of high performance computing and of computing in general, the two most important of these being the PDP-6 and the VAX-11/780.”
Learn more about the Seymour Cray Computer Engineering Award