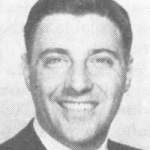 His service with the U. S. Navy during 1943–1946 included field engineering on advanced Naval fire-control equipment, and the development of a radar training device, for which he received a commendation. Subsequently, he taught electrical engineering at the Illinois Institute of Technology and St. Louis University, where he became an assistant professor. He has worked on the design and development of servomechanisms, analog computers, and data storage at Raytheon Manufacturing Company and the M.I.T. Servomechanism Laboratory. In 1954, he organized and headed the Digital Computer Section of the Clevite Research Center, Cleveland, Ohio.

In 1957, he joined the Philco Corporation, Philadelphia, Pa., as section manager of the Control Computer Section. Mr. Hollander was a member of the AIEE, Sigma Xi, and Sigma Alpha Mu, and Chairman of the AIEE Digital Computer Committee.