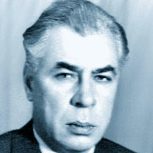 Georgiy Lopato was born on the 23rd of August 1924 near town of Gomel in Byelorussia. His father, of a peasant origin, graduated from an agricultural academy in 1916. After the Revolution and service in the Red Army during the Civil War, he again studied and graduated, that time from the Leningrad Polytechnic Institute, in 1929. In the same 1929 the family moved to Moscow, where the father first worked as an engineer and then taught at the Moscow Institute of Electrical and Mechanical Engineering in Agriculture (at present named Moscow State Agro-engineering University). It was very progressive organization developing scientific traditions of its predecessors: the faculty of mechanics and electrical engineering of the Moscow Agricultural Academy and faculty of electrical engineering of Moscow Institute of Mechanical- and Electrical Engineering. The institute was established in 1930, by leading Soviet scientists — academicians V.P. Goryachkin, V.P. Williams, M.G. Evreinov, etc., who brought its work onto high scholarly level. Providing agricultural producing industry with necessary technical and electrical-power resources was one of the primary items of the state policy. The state program of electrification ad been established and conducted with active participation of academician K.A. Krug — then the leader of soviet electrical science. The atmosphere of general scientific enthusiasm influenced whole lives not only of teachers and collaborators but also of their families.  Read more about Lopato at the Russian Virtual Computer Museum.

Edition and translation by Alexander Nitussov