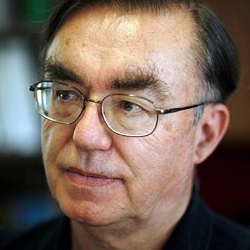 Geoffrey Charles Fox (http://www.dsc.soic.indiana.edu/, gcf@indiana.edu)
Fox received a Ph.D. in Theoretical Physics from Cambridge University where he was Senior Wrangler. He is now a distinguished professor of Engineering, Computing, and Physics at Indiana University where he is the director of the Digital Science Center. He previously held positions at Caltech, Syracuse University, and Florida State University after being a postdoc at the Institute for Advanced Study at Princeton, Lawrence Berkeley Laboratory, and Peterhouse College Cambridge. He has supervised the Ph.D. of 73 students and published around 1300 papers (over 520 with at least ten citations) in physics and computing with a hindex of 78 and over 36000 citations. He is a Fellow of APS (Physics) and ACM (Computing) and works on the interdisciplinary interface between computing and applications. Current application work is in Biology, Pathology, Sensor Clouds and Ice-sheet and Earthquake Science, and Particle Physics. His architecture research involves High-performance computing enhanced Software-Defined Big Data Systems on Clouds and Clusters with open source software Twister2. The analytics focuses on scalable parallel machine learning. He is an expert on streaming data and robot-cloud interactions and deep learning applied to geospatial time series and to improve performance and capabilities of large scale computations – called MLaroundHPC. He is involved in several projects to enhance the capabilities of Minority Serving Institutions. He has experience in online education and its use in MOOCs for areas like Data and Computational Science.