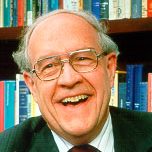 Dr. Frederick P. Brooks, Jr. joined IBM in 1956, and in 1960, became head of system architecture.  He managed engineering, marketing, programming and architecture for the proposed IBM/360 family of computers.  The concept – a group of seven computers ranging from small to large that could process the same instructions in exactly the same way – was revolutionary.  It meant that  all supporting software could be standardized, enabling IBM to dominate the computer market for over 20 years.  Dr. Brooks’ team also employed a random access disk that let the System/360s run programs far larger than the size of their physical memory.

In his influential book The Mythical Man-Month: Essays in Software Engineering, Dr. Brooks candidly chronicled the development of the IBM Operating System/360.  He condemned the corporate practice of adding more people to a software development task in hopes of speeding up its completion.  “Since software construction is inherently a systems effort – an exercise in complex interrelationships – communication effort is great and it quickly dominates the decrease in individual task time brought about by partitioning,” he wrote.  He contended that “adding more men then lengthens, not shortens, the schedule.”  The book, originally published in 1975, remains a defining work in the field of software engineering.

A 1999 winner of ACM’s Turing Award, considered the “Nobel Prize of Computing,” Dr. Brooks was the first recipient of ACM’s Allen Newel Award in 1994.  He also won ACM’s Distinguished Service Award in 1987.   He is a member of the National Academy of Engineering and a former member of the National Science Board and the Defense Science Board.  In 1985, Dr. Brooks became one of the first people to receive the National Medal of Technology presented by the President of the United States.