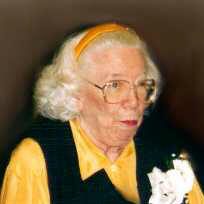 When Frances Elizabeth Snyder Holberton began to study at the University of Pennsylvania, her math professor said she should be home raising children. She believed computers would flourish only if they were easy to program and operate. Betty said she spent half her time trying to figure out what people needed in computers, and the other half convincing an engineer it was his idea, so the work would be done. She led a committee devising the first language allowing programs to be run on more than one computer, Cobol.

Frances Holberton was a computing pioneer who was one of the six original programmers of ENIAC 50 years ago. The Electronic Numerical Integrator and Computer (ENIAC) was developed at the Moore School of Electrical Engineering at the University of Pennsylvania and had been completed in the fall of 1945 and revealed to the public in February 1946. It was the first operational, general-purpose, electronic digital computer. It was pursued by the Army as a means to speed up calculations required to produce firing tables. ENIAC was first used to solve an important problem for the Manhattan Project. The ENIAC is important historically, because it laid the foundations for the modern electronic computing industry. More than any other machine, the ENIAC demonstrated that high-speed digital computing was possible using the then-available vacuum tube technology.